Continuing our march through the top 60 Topps cards of all time, it appears that this third installment also happens to include a fair number of cards from a certain, Queens-based baseball team. 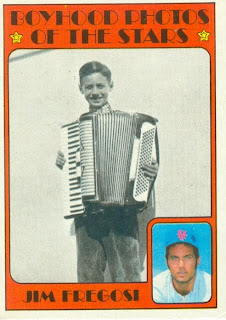 No. 40: 1972 Jim Fregosi Boyhood Photo
Jim Fregosi: All-Star infielder, killer accordion player. Trading Nolan Ryan probably made a lot more sense to fans once this card came out and they learned that Fregosi was a man of many skills. Most of the boyhood cards in the magnificent 1972 set showed the players in their Little League uniforms. Not Fregosi. No, he’s brandishing that massive accordion, ready to burst out a lethal version of “Lady of Spain.” And the crazy thing is the back of the card details Jim youth league exploits and never once mentions his apparent musical skills. 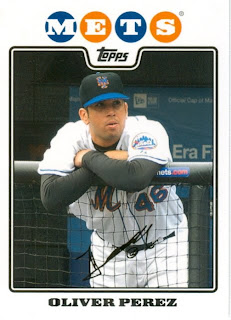 No. 39: 2006 Oliver Perez
Perez is one of those players who seem to always have a sharp-looking action card. But I like this one best. Because if Ollie is on the bench, then he’s not in the game, walking the bases loaded and then giving up a grand slam. The odds of the Mets winning increase dramatically if Ollie is not playing. 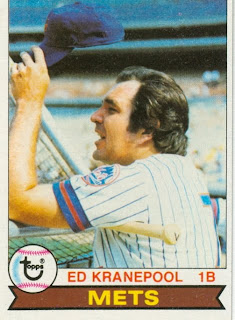 No. 38: 1979 Ed Kranepool
In the days when card companies released only one set a year, Steady Eddie undoubtedly held the record for most appearances on cardboard by a Met. But 1979 was the last of his 18 seasons. This photo almost looks like Krane is tipping his cap to fans saluting him for a fine career. 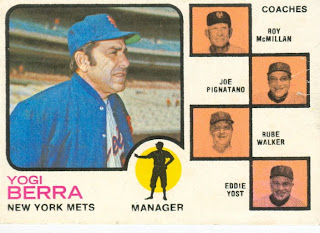 No. 37: 1973 Yogi Berra
Topps rarely added coaches to the manager cards, and it was nice to see Rube Walker, Roy McMillin, Eddie Yost and Joe Pignatano getting some recognition in the 1973 and 1974 sets. 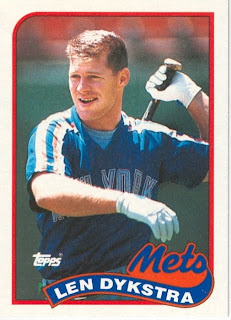 No. 36: 1989 Lenny Dykstra
I met Dykstra at a card show in Manhattan around the time this card came out. He seemed really nice when I asked him too sign my Mets book, and to add his nickname “Nails.” He did – and spelled it wrong, realized the error and tried to fix it. Sharpies are unforgiving. He sheepishly slid the book back across the table. 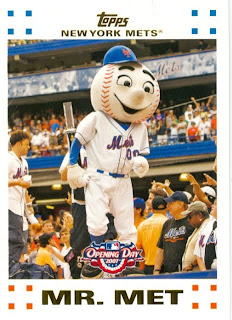 No. 35: 2007 Mr. Met
Topps started to give Mr. Met and less-worthy mascots some love the Opening Day sets. Note the assistant with the T-shirt launcher. I’m reminded of the television ad with Mr. Met sneaking into the empty stands before a game and launching shirts at an unsuspecting grounds crew member, then attempting to duck behind a seat. “Dude, I can see like 80 percent of your head!” 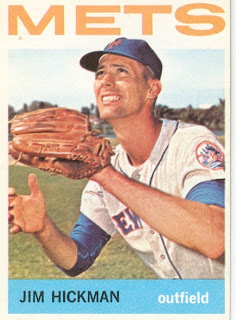 No. 34: 1964 Jim Hickman
The 1962 Mets were a collection of faded stars, the under-skilled and a few youngsters with some potential. Count Hickman in the last category. He was a solid player and holds some milestones, including being the first Met to hit for the cycle. He hit the last homer in the Polo Grounds and was the first Met to hit three homers in one game. He also was the last of the original Mets. Hickman later represented the Cubs in the 1970 All-Star Game and smashed the 12th-inning hit that drove Pete Rose around third and barreling into Ray Fosse. 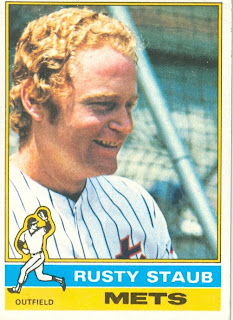 No. 33: 1976 Rusty Staub
This portrait of a smiling Daniel Joseph Staub makes it pretty clear how he came to be known as “Rusty,” and “Le Grande Orange,” hero to Canadians. Alas, Staub was know by another name by the time this card came out: Detroit Tiger right fielder. Yet another bad trade by the Mets, and incoming Mickey Lolich didn’t even play the accordion. 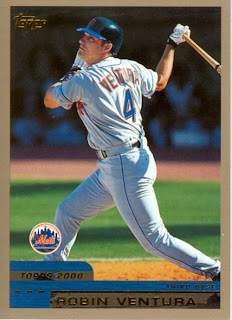 No. 32: 2000 Robin Ventura
Ventura’s Grand Slam Single in the rain during the 15th inning of Game 5 of the 1999 NLCS is easily one of the Mets most glorious post-season memories. But there have actually been two other grand slam singles, though none as dramatic. In 1970, the Tigers’ Dalton Jones accidently passed teammate Don Wert while rounding the bases. And on July 4, 1976 Fox broadcaster and know-it-all Tim McCarver must have been too enthralled by the bicentennial celebration because he passed teammate Garry Maddox. As for Ventura, the lighting on this 2000 card is just perfect. 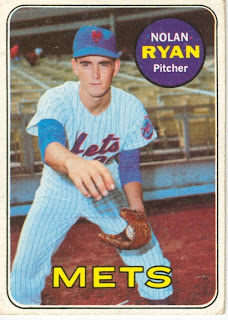 No. 31: 1969 Nolan Ryan
And we close out the first third of our countdown with Nolan Ryan, before he was traded for a musician. Look closely at Nolan’s glove. That would be the ball nestled in the webbing. Ryan was famous for his blazing fastball, supposedly throwing so hard that batters could barely see it. Or, as this card suggests, Ryan was just really good at the old hidden ball trick.
Posted by Mets Guy in Michigan at 11:20 PM

I vividly recall McCarver's mishap. I watched that game in my parents' bedroom.

A couple years ago I purchased Lanny Frattare's (Pirates' broadcaster) scorecard of that game. That hangs in my son's bedroom.
http://www.flickr.com/photos/rdowens/3124532418/

Any alleged Topps top 60 list that doesn't include the 1952 Gus Zernial (which this one won't because, of course, ol' Gus was never a Met) is a fraud the likes of a Met fan putting on his Skankee gear after being KO'd from the previously mentioned 1999 LCS.

That Mr. Met commercial is a great one.