Counting down the Topps All-Time Top 60 with numerical issues

After some detours and debates, we’re back to counting down the top 60 Topps baseball cards of all time, and it again looks like the company has smiled upon the Mets with cardboard quality. 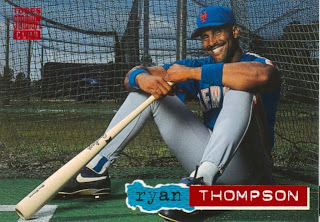 No. 30 1994 Stadium Club Ryan Thompson
Thompson looked the part. The centerfield prospect was a big part of the 1992 mid-season deal that sent David Cone to the Blue Jays. The Mets also got a red ass second baseman named Jeff Kent who did not then appear to be the potential Hall of Famer he would be come. Thompson got the slugger’s number of 44 and was intended to be the new Darryl. Alas, it was not to be. Thompson’s best year was 1994, when he hit 18 homers but hit just .225. The Mets gave up on him in 1996, sending him with Reid Cornelius to the Indians for Mark Clark. Thompson bounced between the minors and majors for several years after that, even getting a ring with the vile Yankees in 2000. His 1994 Stadium Club card showed he sure knew how to pose. No. 29, 1987 David Cone
Speaking of Cone, his 1987 card in the traded set is a classic. And when anyone complains about the Nolan Ryan trade, the balance came in spring 1987 when he came with Chris Jelic to the Royals for Rick Anderson, Goose Gozzo and Ed Hearn. The following year Cone set the league on fire, going an incredible 20-3 with a 2.22 ERA. He was hosed in the Cy Young voting. It’s one thing to fall behind Orel Hersheiser in his magical year. But Cone finished in third behind Danny Jackson, who had three more wins but five more losses and an ERA a half-run higher. The card shows his compact delivery, one of several Cone could throw at batters to keep them off balance – which helped him strike out 19 batters in one game. Cone attended University of Missouri for a bit, and even planned to attend the School of Journalism. Had he stayed in school, we would have been classmates. 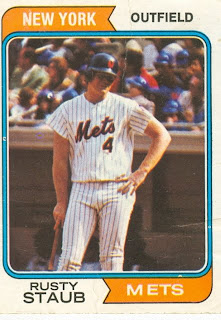 No. 28, 1974 Rusty Staub
Rusty came to the Mets in 1972, but didn’t appear in the 1972 and 1973 Topps sets. But his Mets debut – like much of the 1974 set -- is a classic. Clearly the umpire has just made the egregious mistake of calling a strike, and Rusty is implying that perhaps the man in blue is mistaken. Based on the folks in the stands in the background, I’m guessing the photo was taken on Helmet Day. 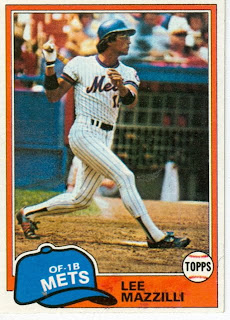 No. 27, 1981 Lee Mazzilli
I confess that I did not know that Mazzilli, one of the only stars the Mets had in the late 1970s and early 80s, held or shared seven speed skating championships. That explains the skin-tight uniform. Nor did I know that he set a league record – possibly the professional record – for stealing seven bases in a game while playing for Visalia in the California League. I remember how unhappy the Brooklyn native was about being traded to the Rangers, but the deal brought Ron Darling and eventually Howard Johnson. How nice was it to see Lee return for the end of the 1986 season and hit .400 in the World Series? 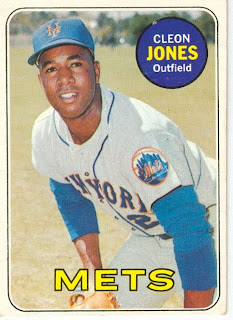 No. 26, 1969 Cleon Jones
Cleon looks great in this card, and in 1969 he certainly was. His .340 average stood as the team record for nearly 30 years, with John Olerud besting it in .354. His abrupt removal from the game a July 30 double header – and the still debated reason why – is believed by some to be a turning point in the season. And it was Jones’ shoe that was hit – or not, depending on how deviously brilliant Gil Hodges was – that let to his controversial walk followed by Donn Clendenon’s home run to get the Mets back in the fifth and deciding game of the World Series. 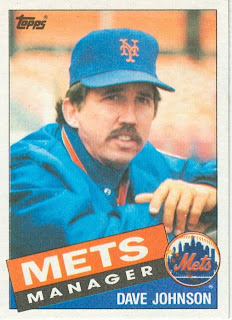 No. 25, 1985 Davey Johnson
Topps can have several rather dull years in a row, and then somehow manage to have everything come together. The 1985 set was one of those years, with a great design. Even the manager’s card looks great! 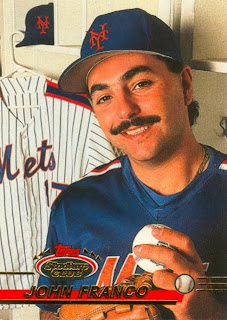 No. 24, 1993 Stadium Club John Franco
John Franco is certainly an all-time Met, but if the team ever decides to retire his number it is going to have some issues. Franco was already a star when he arrived from the Reds in 1990 wearing No. 31. But he gave it up when Mike Piazza arrived in May 1998, which he didn’t have to do considering he was practically Mr. Met. He assumed no. 45 to honor Tug McGraw – a number Pedro Martinez claimed the year Franco departed. Now, why does this otherwise magnificent portrait of Franco show him standing in front of a jersey with No. 17? Depending on when this was snapped, the jersey belonged to either David Cone or Jeff McKnight. 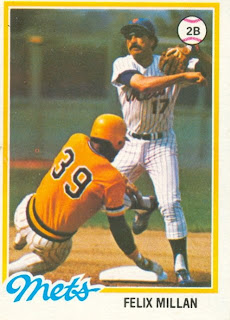 No. 23, 1978 Felix Millan
Maybe Franco had the jersey there to honor Felix Millan, the steady second baseman through much of the 1970s. Millan didn’t hit for power, but specialized in choking up on the bat and slapping the ball in play. Dude simply did not strike out. The 1976 card also is great, and shows how he gripped the bat. But I favor this wonderful action fielding pose. 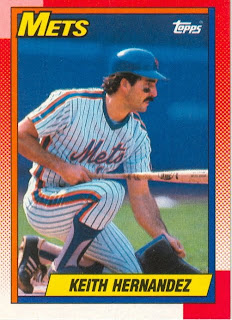 No. 22, 1990 Keith Hernandez
The 1990 set is usually considered to be the company’s nadir. The design is dreadful, and the cardstock was crappy and many of the photos were blurry messes. But sometimes a really good photo can make it through all the other issues. Keith has some nice cards, especially the 1983. But I like this shot of him in the on-deck circle. And if the Mets ever do get No. 17 on the wall alongside Casey, Gil, Tom and Jackie, this will be the player they’ll be honoring. 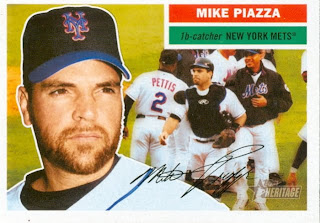 No. 21, 2005 Heritage Mike Piazza
But I think there is little doubt that the next number on the wall will be No. 31 for Mike Piazza, most likely when he’s elected into the Hall of Fame in a couple years. The 1956 Topps set is in the discussion as the company’s best ever, and the Mets weren’t around then. So the Heritage issue is the next best thing.

Next we'll venture into the top 20!
Posted by Mets Guy in Michigan at 9:22 AM

In a list that gins up bogus (and in a few cases mediocre) Mets cards as a "Topps all-time top 60," it makes perfect sense for someone to argue that Dave Cone deserved to finish ahead of Danny Jackson in the 1988 Cy voting.

Dave, you're the Baghdad Bob of Metsdom.

My friend had gone to helmet day in 1973, probably when the Rust Staub photo was taken. I always thought the kid over Rusty's right shoulder was him.

By the way, Rusty, is that a large cup you're wearing or just happy to be on the Mets.