The glorious disaster that was the Mercury Mets 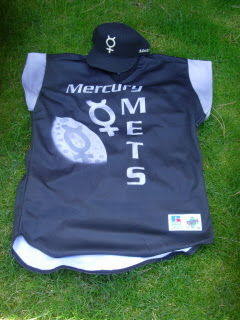 You can get a uniform purist all riled up with a discussion about black alternate jerseys.

And if you want to get them really agitated, just talk about MLB’s 1999 “Turn Ahead the Clock” promotion.

Then, if you want to push them over the edge into a foaming-at-the-mouth rage, all you have to do is say “Mercury Mets.”

It was either a horrible promotion or a brilliant one. Personally, I liked baseball’s “Turn Ahead the Clock” nights — in theory.

The fact that the promotion is still hotly debated eight years later speaks volumes. I get several hits every day from people Googling Mercury Mets.

The idea was a fun reversal of the frequent “Turn Back the Clock” games where teams take the field wearing uniforms of the past.

Teams were supposed to wear futuristic uniforms in these games. Apparently, teams in the future will have the same logos as they do now, just blown up really, really big — with really short sleeves. At least that seemed to be the template.

Some were horrible, like the Phillies. And some were really cool, like the Diamondbacks, which had a snake wrapping around a player’s entire body. 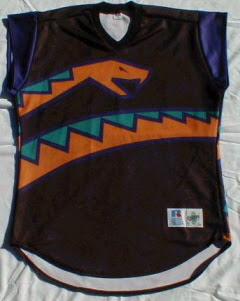 Then you had the Mets.

If only they’d stuck to the template. A proud New York skyline stretching across the entire jersey could have been a beautiful thing. Or an apple, or the Statue of Liberty...there was endless potential.

No, for some reason, designers opted to go in an entirely different direction for our Mets. Only they weren’t our Mets anymore. Suddenly the team hailed from Mercury.

I suspect a Yankee saboteur, implying that the punks in the Bronx not only chased us out of town, but entirely off the planet.

If that alone doesn't scare you, consider the design.

A gray, cratered planet takes up a big chunk of the front, with the astronomical symbol floating above with words Mercury Mets in the top corner. It looks nothing like a baseball jersey.

And worse, we were one of the few teams with a matching cap. 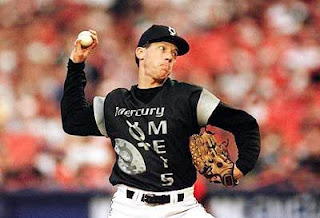 Does the Bulldog look happy? No, he does not.

I remember seeing the first photos on the wire and being crushed with disappointment. It was truly one of those “What in the heck were they thinking?” moments. As a lover of all things uniform-related, I was ticked. I wanted better.

Then it slowly dawned on me. These uniforms are so horrible, so mind-numbingly disastrous that they’re glorious.

I figure you can lie there and suck like a Devil Ray, or you go down in a spectacular ball of flames.

We are the Mets. When we lose, we don’t just lose, we set the modern record for losses, baby!

When we have a bad free-agent signee, we don’t just have a guy who doesn’t play well. We get a washed-up, over-priced and delusional outfielder who throws fireworks at toddlers.

So I was pretty excited when I saw that Starstruck was selling Mercury Mets caps online, at a discount, of course. Soon after, I found the jersey on eBay. I might have been the only bidder.

I’m not saying I wear these things in public. But they are an important part of the Mets collection in the baseball room. We must embrace all aspects of our history.

We are the Mets. We are fun. The Yankees wanted no part of the “Turn Ahead the Clock” night. Screw ‘em, the joyless punks.

The game itself was no treat for Mets fans of this planet or Mercury, a 5-1 loss to the Pirates with Kris Benson tossing a complete game.

And speaking of what-were-they-thinking moments, it was Jason Isringhausen’s next-to-last game as a Met before he was dished off to the Athletics with Greg McMichael for Billy Taylor. Because when we make a bad trade.....

The game also was famous for turning players into aliens for their scoreboard photos. Rickey Henderson didn't like how he was portrayed, with three eyes and long ears.

Riding With Rickey is a kick-butt blog on its own. But Rickey directs us to other blogs that Rickey likes, and Rickey knows some really funny people.

I must point out this link to Timothy McSweeney’s site, in which author Joe Moe sizes up the presidential hopefuls, posted here then taking a fresh look at issues raised by “The Devil Went Down to Georgia,” required reading for people who went to high school in New York in the 1980s and were subjected to the whole Daniels fad.
Posted by Mets Guy in Michigan at 6:53 PM

Email ThisBlogThis!Share to TwitterShare to FacebookShare to Pinterest
Labels: Mercury Mets, Turn Ahead the Clock

great post and great idea. i wish I had thought of collecting the mercury merchandise.

always glad for the shout out buddy. cheers.

I was at the game. Drove up to Shea on a whim, not knowing it was Turn Ahead The Clock Night. I'll never forget seeing Isringhausen in his "Izzy" jersey, or Rickey Henderson's alien pic on the Diamondvision. Hey, do you think they'll auction off the Diamondvision when they dismantle Shea?

Damn, why'd you have to remind me of this? What an embarassment.

Anonymous said...
This comment has been removed by a blog administrator.
11:16 PM

I was at that game! Yeah I remember it all. Everyone was laughing at how bad the uniforms were. The scoreboard showed everyone as if they were an alien or something. A lot of teams decided not to partake in the "Turn Ahead the Clock" Promotions. But not our Mets. They will do anything with the promise of making a dollar and getting some unneeded attention. And why they moved from New York to Mercury all of the sudden I still didn't get. But yeah I remember the uniforms and the game well. I remember how mad I would get whenever Mets did stupid things like this. The year they removed names from the uniforms all together for example which caused much outrage in the city all year. Ugh it's all coming back to me now. I hope it leaves for good now.

As a 13 year old fan in attendance that evening, I thought the alien photos of the players were pretty damn awesome, and I still have my Mercury Mets hat. I am listening to the game tonight, and since it's "Star Wars" night, the announcers mentioned the Mercury Mets and I had to google that. Thanks for a highly entertaining post!