Sounds of December: Billy Squier, 'Christmas is the time to say 'I Love You'' and the best and worst of MTV 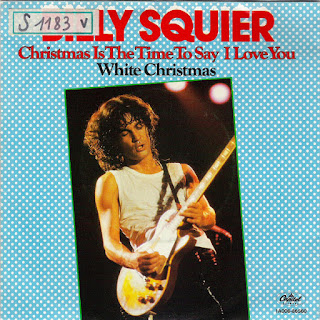 MTV giveth and MTV taketh away. That’s pretty much the Billy Squier story. And he contributed one classic Christmas song before things went south.

Squier’s 1980 album was a huge hit, with four songs getting a lot of airtime in the fledgling video channel.

He popped a Christmas song on a B-side of one of the 45s. “Christmas is the Time to Say ‘I Love You’” is a bouncy, happy singalong. There’s not a ton to it, just two verses and a repeated chorus:

But it’s fun and light, and it was a Christmas song by a rocker.

My first Christmas mix tape was recorded off a radio special. I always had blank tapes ready to throw in the stereo and start recording when something cool came on. This first tape stayed with me for years, decorated with Christmas stickers and repaired several times. People surviving the cassette era know the struggle of gluing back together a prized tape after it was caught in a player. I still have the tape somewhere, saved for sentimental value.

What was cool about this radio special was that it introduced me to all kinds of rocking Christmas songs I didn’t know existed. Keith Richards’ “Run, Run, Rudolph,” Robert Gordon’s “Blue Christmas,” Joan Jett’s “Little Drummer Boy” – all of these were new to me.

“Christmas is the Time to say ‘I Love You’” was one of the songs discovered that day, and eventually I’d find a re-released 45 of the song for future mix tapes. “White Christmas” is on the B-side, and it’s not as good.

The song has a special place in MTV history, as Squier filmed a video with the MTV on-air talent and much of the staff that seemed like a rollicking good time.

"If I had to go back in time and revisit one day, like if I could get into the DeLorean and go back to one moment, it probably be this. What you see in that video, it was recorded within months of our launch, and we were all so starry-eyed, such believers. We were rebels with a cause. Everyone you see in that video, they’re the technicians, the secretaries, the executives, the production assistants. We were all one big happy family, fighting for MTV. We believed so strongly in the power of rock ‘n’ roll. And you can really see it there."

So Billy was an early MTV hero. But things went bad in 1984 when it recorded an over-the-top video for the hit “Rock Me Tonite.” Take the goofiest parts of the 1980s, dial it up five or 10 notches, and you get this video of Billy oddly dancing around his apartment, eventually ripping off his shirt. It became a punchline, and pretty much destroyed his career.

But 35 years after the disastrous video, people are still playing “Christmas is the Time to Say ‘I Love You.’” It’s been covered by several artists and appears on a bunch of compilations. It's been a staple of every Christmas Favorites playlist I've made.

Hopefully Billy had the last laugh – or the last “ho, ho, ho!”

I've been re-listening to Billy Squier recently and he has a sound that I miss.

I do remember the Rock Me Tonite video. I recall I didn't like the song as much as his earlier songs, but I don't remember the ridicule. That must've come later.

He had some really good songs! I saw him open for Foreigner on that "Don't Say No" tour and put on a great show!