Moving into the top 20 of the Topps greatest 60 cards of all time, we're encountering some of the game's great characters -- and the company's greatest sets. 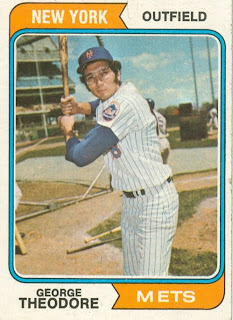 Can you imagine if George Theodore had been a Yankee? They’d have sucked the color from him like a vampire. But as a member of the Mets, he’s a legend despite just two part-time seasons where he demonstrated no significant prowess. But he was wonderfully quirky, with his gangly physique that earned him the nickname “The Stork,” and spouting quotes like, “I've been trying transcendental meditation, and that helps me be passive and wait on the curve. I've got to find something else to hit the slider." He’s likely the only Met with Basil for a middle name, and to come from Utah, where he is enshrined in the state’s Sports Hall of Fame. And he’s just as famous for his horrific outfield collision with Don Hahn in 1973, just another odd aspect of that incredible season. And one of the best things about the spectacular 1974 set is that in includes a card of Theodore, with legendary cartoon on the back proclaiming that George like marshmallow milkshakes. 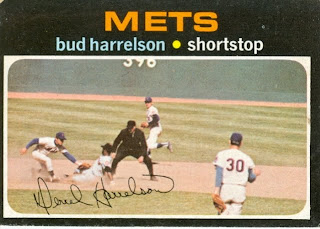 Speaking of quirky, the 1971 shot is one of Topps’ best – and most unusual. The company started to use more action photos, but it seemed like a bunch of them were taken from the stands. Buddy Harrelson’s horizontal beauty is a classic example. There are four players in the photo and one umpire. We’re assuming that Buddy is the one placing the tag on the apparent Astro since he’s a shortstop. The second baseman, whom I believe to be Ken Boswell, is running to back up the throw, and it looks like Nolan Ryan is quietly pumping his fist in celebration. These days, Topps would likely crop in tight on Buddy and the Astro and PhotoShop out Boswell and it just wouldn’t be as fun. 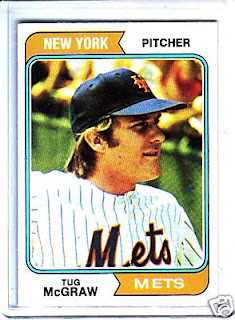 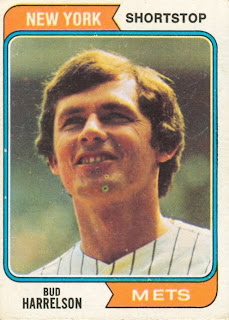 Yeah, I’m cheating a little here. But these cards go together like Jose Reyes and triples, Endy Chavez and amazing catches and Oliver Perez and stink.

Both are great portraits, and not the kind usually associated with baseball cards. Topps sets for most of the 1960s were littered with Big Head, No Hat shots, and most looked like mug shots.

Buddy’s capless, but it seems intended to show off his ‘do. And Tug’s wearing his cap, but it looks like he’s having a nice conversation with fans. Had this been in the 1971 set, we’d have seen the fans he was talking to, plus a dozen more in the section, two vendors and half of Flushing Meadows Park.

Buddy gets points for coming back to the Mets as coach, then a brief tenure at the helm before being the face of Long Island minor league baseball with the Ducks. 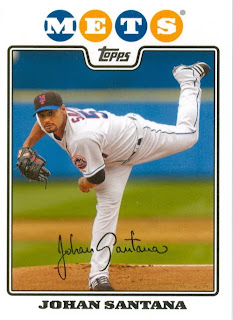 This Santana shot is more typical of the modern Topps action shot. A little better, actually because it’s incredibly crisp, and the colors all just work together beautifully. Johan has an unusual motion, on display here, and this must be what a batter sees. And look how clearly Santana signs his name! He’s an ace is all aspects of the game. 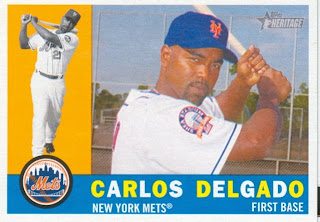 I was torn between two Delgado cards. The 2008 Heritage set uses the 1959 set, and it’s pretty perfect, with the headshot in the circle showing Carlos with a nice smile. But the 2009 card is equally perfect, using the 1960 card as the template. This time we get a menacing Carlos posing in his stance. That must have been the look Yankee pitchers got on July 27, 2008 when he hit a grand slam and recorded a team record 9 rbis, part of a glorious 15-6 rout at that ugly ballpark in the Bronx. Many Yankee fans wept that day. The card shows him wearing the Shea Stadium patch from that year, and that blue cap just looks beautiful. 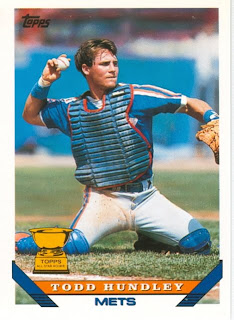 Remember when Hundley was our best player? He broke the record for most home runs in a season by a catcher, and the Mets’ season record, too. Javy Lopez broke the catchers record and Carlos Beltran tied the Mets mark. Some people note the Todd was mentioned in the Mitchell Report. But Mets don’t do steroids. Hundley was pushed aside when Mike Piazza came, and there is certainly no shame in that. His attempt to move to leftfield was laudable, though not successful. I like this card for a couple reasons. First, there is the trophy for being named to the Topps All-Star Rookie team. Then, this is a great action shot. It looks like Todd chased an errant throw back behind the plate and is getting ready to rocket the ball back. But I do notice that he’s wearing a batting practice jersey, so it could be a spring game, or he’s faking an action shot. But Mets don’t fake action shots. 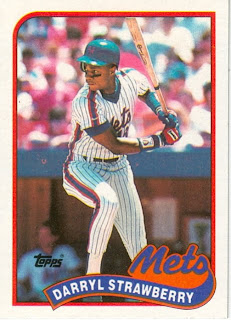 Speaking of fallen heroes, I was torn between two Darryl cards. His 1985 card is fantastic, as crisp as a Topps base set photograph can get. It shows Straw after a mighty swing, looking to survey the damage before breaking into his run. All the elements work – the uniform, the card design, and the background. I went with the 1989 card instead, which also has a great design, with his beautiful home uniform working with the card colors. This photo isn’t quite as crisp, but shows Straw early in his swing with the leg up high and hands back and low, eyes intently focused on the incoming pitch before he launches. 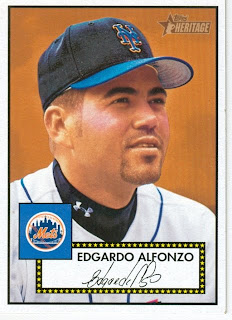 Topps has done a nice job with its Heritage cards, and this one calls back to the 1952 set. Fonzie seems like the guy the Mets seemed to take for granted. He was an undrafted free agent, and worked his way up through the system and was moved around the infield in his first year. He was outstanding at third, moved to second when the team landed Robin Ventura and then headed back when Roberto Alomar came around. His run in the 1999 playoffs was epic. His leadoff home run was all Al Leiter needed in the tie-breaker against the Reds, and he lead off the first game against the Diamondbacks with a home run off Randy Johnson and smacked a grand slam in the ninth to break a tie. 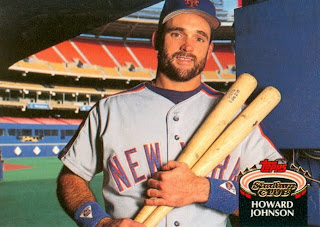 HoJo’s apparently lost his job as Mets hitting coach, but tutoring batters isn’t going to be his claim to fame anyway. My favorite HoJo story involves his comeback attempt during the 1997 spring training. It became apparent that the magic was gone, but Bobby Valentine kept him around all spring and giving him at bats. Why? Each time he was greeted with a standing ovation. HoJo played with the Rockies and Cubs after departing from the Mets in 1994, and the spring turned out to be a curtain call for the fans to say thanks for the late 1980s and early 1990s. This Stadium Club card is a great portrait. 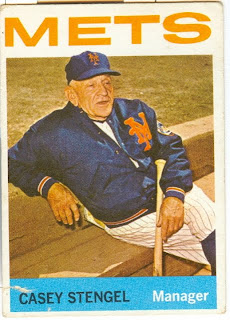 Topps used a nearly exact photo for the 1965 set, both cards are wonderful. “The Ole Professor” is holding court on the dugout steps, and I imagine it’s the Polo Grounds since the steps don’t look brand new. Holding court was what Casey did best in those years, since we know he was fond of napping during games and turning things over to the coaches.

Next we’ll move into the top 10, which is difficult since I have about 15 cards I wanted to cram in there.
Posted by Mets Guy in Michigan at 11:34 PM