We’re back with Part 2 of the countdown to the top 60 Topps baseball cards of all time. So far, all of the cards happened to be of Mets players. Let’s see if this trend continues. 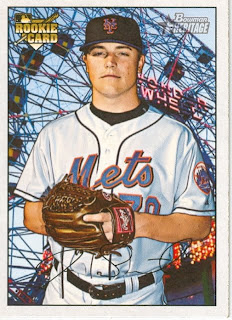 No. 50: 2007 Bowman Heritage Joe Smith
Smith became a fan favorite as a rookie, coming out of the pen with his unusual side-arm delivery and knee-buckling pitches. Alas, he went to the Indians as part of the great bullpen purge and has been steady if not unspectacular for the past two seasons –meaning the Mets have missed him greatly. This is a fun card because Topps inserted city scenes in the backgrounds. Joe has Coney Island’s glorious Wonder Wheel for all to see. And the end of the 2007 season made a lot of Mets fans want to hurl, kind of like after you hop into one of the swinging cars in the Wonder Wheel after downing a couple dogs at Nathan's. 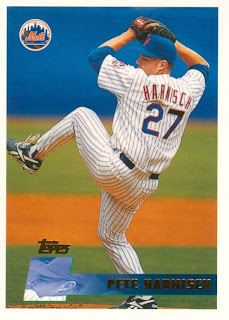 No. 49: 1996 Pete Harnisch
Harnisch got points for being from Commack and being a decent enough pitcher on some crappy mid-90s Mets teams. He’s famous for a couple other things, like being one of only 26 pitchers to strike out a side on just nine pitches. He also went public with his battle with clinical depression while pitching with the Mets in 1997. He’s also got and unusual pitching motion, which this card captures perfectly. 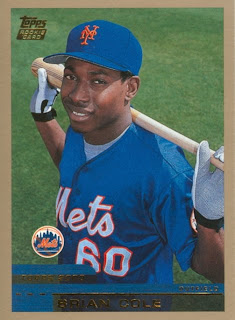 No. 48: 2000 Brian Cole
Of course we’ll never know if Cole would have become the great ballplayer we all expected him to be. He died from injuries suffered on at the end of spring training in 2001, when his Ford Explorer Sport veered off State Highway 8 in Florida and rolled over. But we know for sure that even at his young age, Cole knew how to pose for a baseball card. This portrait is one of the best in the set. 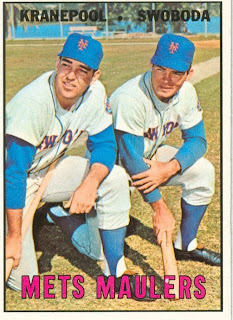 No. 47: 1967 Mets Maulers
Topps would occasionally slip into sets neat shots of more than one player, based around a theme. Casey Stengel and Gene Woodling were on a “Veteran Masters” card in 1963, and the next year Casey was joined by Ed Kranepool for a “Casey Teaches” card. Kranepool must have been a prized student of the “Ole Professor” because he appeared again in 1967 with Ron Swoboda on a card optimistically called “Mets Maulers.” Truth be told, the Mets of that era were more likely on the receiving end of a mauling. But this is still a fun card of two young Mets. 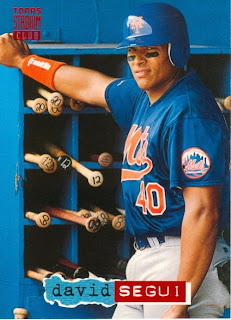 No. 46: 1994 Stadium Club David Segui
Segui offered a somewhat subpar year for the Mets in 1994, hitting .241 with 10 home runs. The next year he improved nicely to a robust .309 batting average with a bunch more doubles and triples. Now sometimes when a player makes a nice little boost like that, people throw around an ugly word, and that word is steroids. Often, such players play for the Yankees. There are some people who run around saying Segui confessed to taking such things. I think Segui is mistaken, because everybody knows Mets would never take steroids. That said, I really like this dugout portrait. 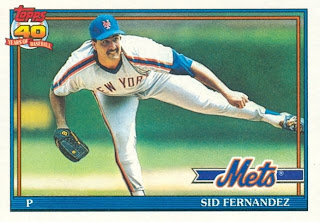 No. 45: 1991 Sid Fernandez
Topps bounced back from the total disaster that was the 1990 set with one of the company’s better offerings in 1991. El Sid notched his best season with the Mets in 1986, going 16-6 and a masterful relief performance in Game Seven of the World Series. But the 1991 season of this card was a disaster, with Sid breaking his arm in spring training, returning in July then breaking down again with knee problems in September. The horizontal card from that season, however, is Sid’s best. 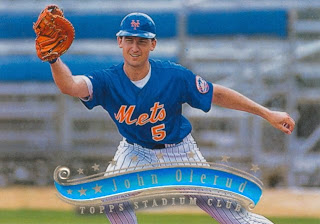 No. 44: 1997 Stadium Club John Olerud
The Mets starting rising from the 1990s slump late in the decade, and the 1997 arrival of John Olerud was one of the reasons why. His .358 batting average in 1998 is a team record, and his sparkling defense was one of the reasons by Sports Illustrated parked Olerud on the cover with Edgardo Alfonzo, Rey Ordonez and Robin Ventura with the title “The Greatest Infield Ever?” Amazingly, Yankee hack Tom Verducci did not quit in protest. 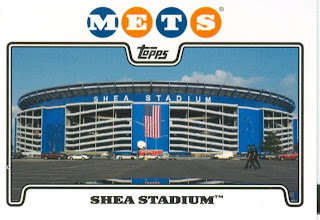 No. 43: 2008 Shea Stadium
The Mets home, in its final year, was granted a card of its own in a special Mets set. A curious choice for a photo, we get an exterior shot with an empty parking lot, save for a couple of New York’s Finest walking through. It’s even hard to make out the iconic neon players. 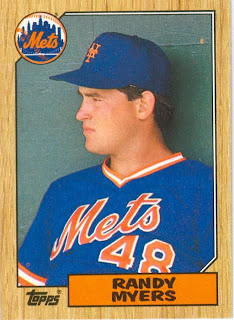 No. 42: 1987 Randy Myers
Myers had cups of coffee with the 1985 and 1986 teams, but came into his own in 1987, even finishing sixth in the Rookie of the Year balloting. This pre-Nasty Boys era photo of Randall K. in is batting practice jersey shows just how good the Mets might look had they adopted blue alternative jerseys instead of the goofy black ones. 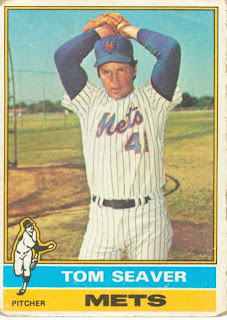 No. 41: 1976 Tom Seaver
You didn’t think some other player would be allowed to carry the honor of being No. 41, did you? There might be a couple Seavers on this list. The 1976 shot shows Tom in a classic spring training, baseball card pose. There might not even be a ball in his hand, but he’s probably not going to fire a pitch from the on-deck circle anyway. I remember pulling this card in the very first pack of cards I opened that year, and decided that I’d never have to buy another until 1977. That rule lasted maybe a day.
Posted by Mets Guy in Michigan at 12:28 AM

That Joe Smith card is awesome!

For those of you fairly new to the English language, Dave's use of "might" in the previous sentence is an example of hyperbole. Hyperbole is an exaggeration so outrageous as to be understood as being not true. In other words, Dave could've just as easily written "There will be a couple Seavers on this list," and the sentence would have had the exact same meaning.

Dave: At this point, it doesn't matter if you include even one non-Met at this point, this is a Mets Topps 60, not an all-time top 60. No problem with that; just call it what it is. And, oh yeah, I'll be back to call you out on this every step o' the way, even when the inevitable Johnny Bench card (or perhaps even a Jack Roosevelt Robinson) shows up later just to try and throw the unsuspecting off the case. And somewhere Billy Bill Khan is rubbing his sore neck from the knowing nods.