Even when the Mets lose, an evening at Wrigley is fun 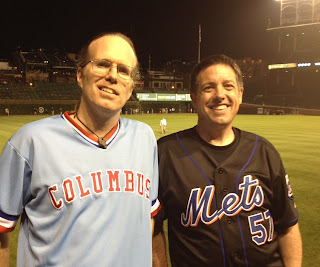 I suspect there are very few ballparks outside of New York – and maybe Miami – where I can walk around in my Mets jersey and not hear a single jeer.

Chicago’s Wrigley Field is one.

Will and I enjoyed our visit to the Friendly Confines despite the Mets being on the short end of the 5-3 game, ending a personal three-game winning streak after finally snapping the epic Streak of Shame.

There are several reasons for this.

First, we were not in the beer-soaked bleachers, where the atmosphere can get a bit rough.
Second, the Cubs are awful this season, worse than usual.

And third, the Wrigley denizens true to form arrived from the neighborhood bars late and head back early. Many are not there to see a ballgame, and possibly couldn’t tell Starlin Castro from Keith Moreland.

So proudly wandering Wrigley in my 2008 Johan Santana jersey, I encountered no taunts and several high fives and conversations with fellow New Yorkers, happy to talk about the Mets’ success and life back in the Homeland. Does it really cost $10 to park at Jones Beach?

Part of the fun of any game at Wrigley is wandering the souvenir stores and then the sidewalk stands, where the wares are not always official and possibly profane, especially when referencing the crosstown rival White Sox.

It’s a Cubbie party, with crowds spilling out of the neighborhood watering holes and into the streets, where fans wait for batting practice home runs to bounce, a guy in a bear costume demanded tips in exchange for photos and residents sold water with a sliding scale of prices depending on team affiliation.

Will and I met at the Ernie Banks statue not long after Ernie Banks himself walked right by, headed into the Cubs offices. 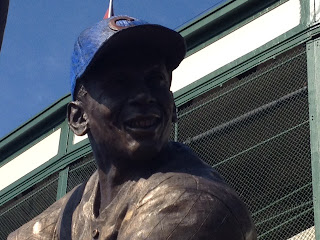 We enjoyed brats on an upper deck patio with a fantastic view of the skyline before making our way to Laurie’s fantastic seats on the third-base side near home plate.

The game was eventful, with Alfonso Soriano making several nice grabs in left to rob the Mets, Lucas Duda stopping at third despite Tim Teufel wildly waving him home and Ike Davis getting tossed after first base umpire botched the call on a pick-off play. 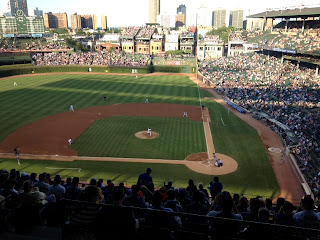 Cubs fans had something to cheer about when prospect – but not technically a rookie – Anthony Rizzo had a nice game in his first appearance.

I pulled out the Mobile Gnome of Defeat for a photo, only to get tapped on the shoulder from a guy in the next row, who had a cardboard cutout of a teacher that he brings as a good luck charm. He said the Cubs are 3-0 when she’s been in attendance.

Naturally we made our way down to the infamous Bartman area to pose, bringing both the Mobile Gnome and the Victory Flag.

Again, there are only so many places not named City Field where you can unfurl a real Victory Flag and not get abuse.
Posted by Mets Guy in Michigan at 11:09 PM