Say hey! The Topps countdown hits No. 4 with Willie Mays 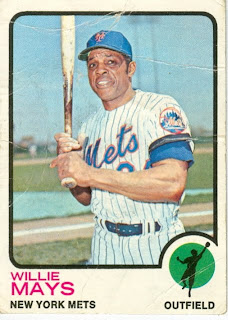 Willie Mays, I submit, is the best all-around baseball player of all time.

His career numbers already are staggering. Now consider that he lost most of 1952 and all of 1953 to military service.

Also consider that his first home ballpark had a centerfield that was so deep it was practically in another borough.

Consider again that his second home ballpark was known for its brutal weather for night games, certain to sap the life out of potential home runs.
Consider, once more, that the staggering statistics were compiled in an era known to be dominated by pitchers.

It’s very easy to argue that had any of those factors been different, Willie Mays’ homecoming to New York in 1972 is a march to home run No. 700 or even beyond.

Imagine Henry Aaron and Willie Mays both chasing down the Bambino in 1973.

Of course, the ways things actually played out was pretty spectacular, too.
Willie arrived home as a beloved elder statesman – thank you, Mrs. Payson – and hit a home run in his first game.

The following year he was picked for the All-Star team as a reserve, and helped guide the upstart believers all the way to the World Series, where he hit .286.
And, on the night he announced his retirement, he delivered the best-known farewell speech of any player not known to be dying. 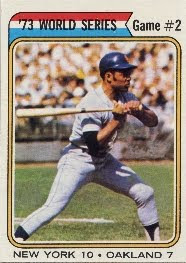 The Mets have kept Mays’ No. 24 out of circulation save for a brief accident and the short tenure of a future Hall-of-Famer. The team needs to go the extra step and place it on the outfield wall alongside Casey, Gil, Tom and Jackie. The best player ever to wear a major league uniform wore the Mets’ blue and orange. We should be proud that.

Mays appears on just two main set Topps cards. He’s part of a World Series subset in the 1974 issue. But I prefer the 1973 card.

Willie’s in a classic batting pose at Shea. He still has arms as thick of tree trunks. Willie’s older, to be sure. But he till looks mighty. And, best of all, he’s a Met.
Posted by Mets Guy in Michigan at 9:06 PM