Jose Reyes looked sharp, but I was pretty dizzy after our adventures with the Mets and Hammerheads 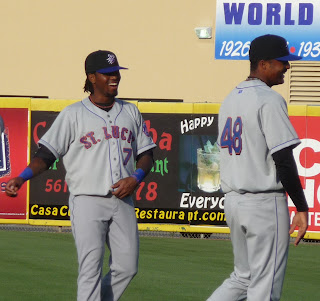 Jose Reyes looked pretty impressive when he stepped onto the Roger Dean Stadium field on Thursday. Me -- not so much.

But we had great adventures watching the St. Luice Mets open the season in Jupiter, Fla. against the Hammerheads, the Marlins’ Single-A team in the Florida State League. 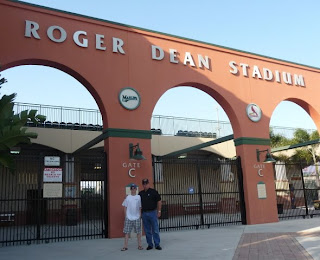 Dad, Andrew and I made plans to see the opener long before we knew that the Mets’ star shortstop would be appearing for a rehab game before heading up to New York to join the team.

Being the FSL, I knew getting tickets would not be a problem. We arrived just before the gates opened and bought tickets, landing front-row seats that looked directly into the Mets dugout. 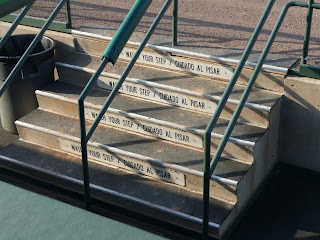 After last season's injury woes, the Mets even get repeated instructions for complicated things like the dugout stairs -- in two languages, no less.

We had barely settled into our sweet seats when a member of the Hammerheads staff appeared with a clipboard, asking if we’d be open to appearing in one of the between-inning entertainment sessions.

It was a rhetorical question, for sure. Andrew and I quickly agreed to take part in the dizzy bat race, signing a waiver protecting the team from everything but us being struck by lightening, and that actually might have been included had I read the document more closely. 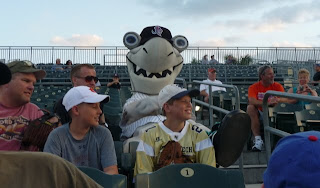 By this point the Mets team bus arrived, players already in their road unis with St. Lucie arching across the chest in the same style as the parent club’s New York. Very nice.

It was a treat to see Reyes seemingly having a grand time mixing it up with the other players, laughing and joking as he stretched, usually with a big grin. He was wearing his familiar No. 7 – did a St. Lucie player lose his number for a day? – and batting lead-off.

When a Tigers player rehabs in West Michigan, the place sells out, the fans go nuts and the team later produces a bobble head with the rehabber appearing in his one-day Whitecaps uniform.

That wasn’t the case in Jupiter, where the attendees were better described as a “gathering” rather than as a “crowd.” No complaints from me, mind you, as I made use of my unobstructed and up-close view of my favorite shortstop. Billy Carroll of the Marlins also was in the game for a rehab stint.

With the crowd so silent, it’s easy to hear the umpires and the coaches, and a fastball slamming into the catcher’s glove echoes throughout the park.

Jose grounded out and later took the field, still smiling. The Mets took and early lead, but starter Jeurys Familia was not having his best game. 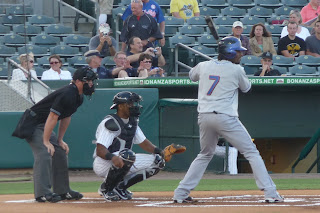 Just after the top of the third inning started, our friendly Hammerheads staffer appeared and took us over to the third base side of the stands, where we sat with two other staffers and Hamilton R. Head, the Hammerheads’ mascot.

We had a nice chat since it was a long inning. Familia hit three batters, including Carroll, who must have been pissed since he is rehabbing after being beaned in a spring training game.

Hamilton technically couldn’t chat, being a mascot and all, but he contributed to the conversation through hand gestures.

Our host was a recent Michigan State University grad, and we talked baseball and about the joys of working for minor league baseball teams. FSL teams don’t draw well to being with, and the Hammerheads share the stadium with the Palm Beach Cardinals. With a game virtually every night, there’s no rush for folks to head to the park. And because most of the teams in the league play in spring training stadiums, the crowds seem even smaller. 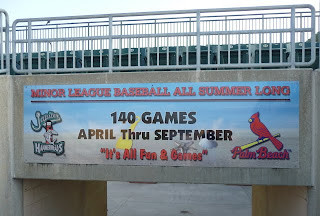 Familia finally retired the side, and we rushed down to the field. Hamilton and a staffer, held a line of crepe paper behind us as a finish line, and our host introduced us to the, um, gathering. Another staffer stood by the rail of the dugout, and I couldn’t figure out why. Did he think I was going to jump the rail and charge the Hammerheads?

Andrew and I were to run a little bit, stand a bat on its end, lean over so it touched our foreheads, and spin around until we were told to run to the finish line.

Now, I’ve watched this type of thing dozens of times at Whitecaps games, and it didn’t seem too tough. When dizzy fans well over, I assumed they either weren’t trying or were tipsy to begin with.

Plus, I was armed with some advice from my friend Sharon, who replied to a Facebook post I sent from the iPhone after being selected. 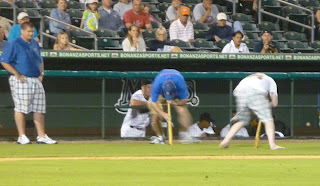 So I was spinning, spinning and spinning, probably making eight or 10 circles before being told to run.

OK, it’s harder than it looks. I stood up, tried to take a step toward Hamilton. I knew which way to go, but my legs wanted to go elsewhere. All I could see was the green grass, and it was still spinning. I realized I was running at the dugout -- and that was not where I was supposed to be going.

Now I knew why the one staffer was positioned by the dugout, because he tried to catch me as I went sprawling into the dirt. I looked up and saw players just a couple feet away, smiling and laughing.

After being helped up – and with the world no longer spinning – I saw that Andrew had no such trouble and was already holding his crepe paper tape. 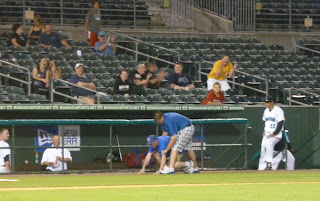 Shameful. At least the fans are having fun. Look at the guy in the yellow, and the people in the Hammerheads' dugout.

My first thought: I'm laying in the dirt and Jose Reyes is not impressed.

“I’m so embarrassed!” I said to a staffer. “Don’t worry about it. You did great. That’s what we like to see.”

Our prize was a baseball stress ball and a pair of tickets to a future game. On the downside, I tried to show off my cool Faith and Fear in Flushing T-shirt to the friends in Florida. My flopping around on the dirt probably did little to expand readership. Sorry, Greg and Jason.

Settling back into our seats, We watched Familia continue to self-destruct, and was yanked after giving up 7 runs in 3.2 innings, all the Hammerheads would need. 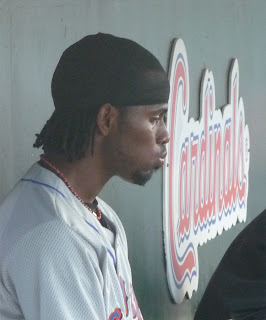 Naturally, we continued to focus on Reyes, snapping shots of him sitting, standing, talking to teammates, picking out his bat, picking up his glove, shouting encouragement to batters and every other single thing he did. Felt a little bit like a stalker after the fifth inning or so.

Jose, didn’t do much at the plate, only getting one ball into the air. But he made some nice plays in the field. 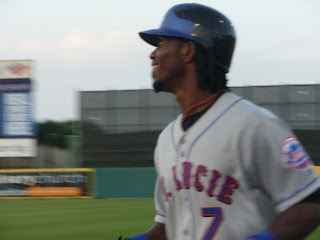 Being in the front row and the stadium being so quiet, we were free to converse. As Reyes walked back after making one out, we said, “Looking healthy, Jose!” and he turned and smiled. After the game, we said, “Glad to see you back, Jose” and he looked over and said, “Thank you!”

Reyes said in the dugout with hitting coach George Greer after the game, and signed about five baseballs for him, then scooted across the field to the third-base side, where the Mets team bus was waiting. Apparently the players make the 40-minute trip back to St. Lucie before they change. 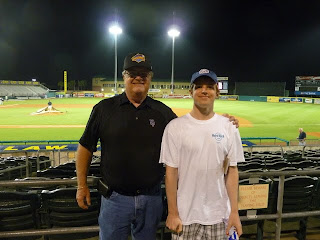 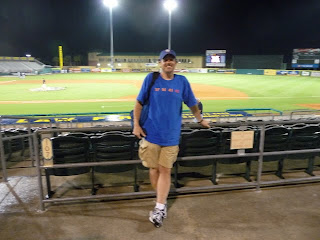 And Dad, Andrew and I celebrated a fun night with an up-close view of one of our favorite players, ending our already eventful week in Florida on a very high note.

Posted by Mets Guy in Michigan at 7:42 PM

Sounds like you had a nice night. I've never been tempted to take part in a dizzy bat race, but it seems like a unique experience. :)

Well ... I suppose I'm obligated as a compadre to make the following obvious snarky jest:

And your confused running around the baseball field was atypical from standard operating procedure ... how?