Solving the mystery of the horrific Hostess Rusty Staub 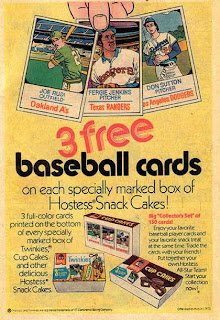 I fondly remember turning over box after box of Ring Dings and Twinkies at the Dan’s Supreme supermarket in downtown Massapequa Park, looking for baseball cards on the bottom of the boxes, searching for the rare Mets player who might appear.

These memories were stirred by a post on Paul Lukas’ awesome Uniwatch blog showing an ad for the cards.

That, in turn, brought back horrific memories of what might be the worst Mets card ever rendered – and a potential mystery solved by members of the even more awesome Crane Pool Forum.

First, some background. Baseball card lovers know that it stinks to have a player wearing the wrong uniform on his card. It just looks bad.

This is a problem because players get traded, especially during the winter. And Topps back in the day the sole producer of cardboard glory, sometimes wanted to get cards produced without having the time – or the desire – to get a fresh photo of the guy in his new threads.

The company worked around this problem in two ways.

First, it would ask each player to remove his cap for a headshot, known in card circles as a “big head, no hat” photo, or BHNH.

Or, the company would either paint over a cap logo, and, in some cases, attempt to paint a new logo on the cap.

The 1962 set had a ton of BHNH cards, since it was the Mets' first year, and manager Casey Stengel appeared with his Yankee logo painted over.

But after that, it wasn’t unusual to see a player or two get the brush treatment. Sometimes the artists did a fairly nice job. Sometimes, not so much.

Logos got more complicated over the years, and the 1977 expansion Blue Jays players no doubt hoped and prayed that the squishy bird heads painted on their cards would bear only slight resemblance to that their actual caps would look like.

That brings us to our horror story and Hostess. The Mets had experienced some awful air-brush jobs over the years, but the 1975 Hostess card of Rusty Staub is the worst of the worst.

Hide the children, because this is nasty stuff. 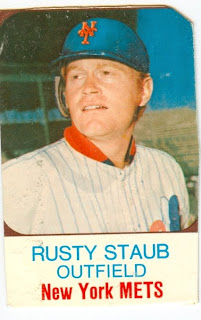 Then it appears an artist started adding Mets pinstripes on Rusty’s unstriped Expos jersey, then got distracted and stopped. Or, he was in a sugar frenzy from eating too many Ring Dings. Either way, there is a whole section of Rusty that is without stripes.

And keep in mind, this card is from 1975. Rusty was traded to the Mets at the start of the 1972 season. You telling me Hostess couldn’t get a current shot of Rusty after three years at Shea?

Something went horribly wrong, and there must be a reason. Crane Pool Forum poster batmgadanleadoff has a theory that makes great sense.

He’s thinking that Hostess used Topps’ archives for the photos. Clearly they reached out to someone because there were a lot of cards in the sets and the bakery folks probably didn’t shoot the players themselves.

“I'm guessing that Hostess licensed their pictures from Topps and that the screwup with the Expos "elb" logo and pinstriping was not an artist's oversight, but that the photo was supposed to be cropped higher up, at around Staub's neck and through the shoulder line. I've seen several proofs of old Topps cards where the cap or helmet was airbrushed to reflect the player's brand new team. In those proofs, the jersey top (former team) was left unaltered. The final card was cropped above the jersey.”

That’s very plausible. And I was convinced when the fine people behind the Ultimate Mets Database created this mock-up of what an air-brushed 1972 Topps Staub card might have looked like. 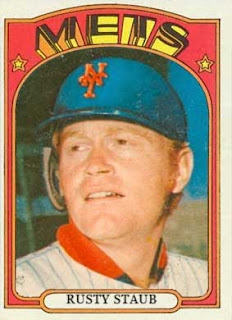 That’s very much in line with what other air-brushed Mets of the ear looked like. So what we likely see before us is Hostess folks not cropping old photos as intended.

Now, equally frightening is the physical cropping of the entire card from the box. I will not accept blame for this. This is the way the card was when I found it at a show – the only time I’ve ever seen it.

Maybe Rusty bought up all the boxes to prevent this nightmare from getting out in public, but I don’t think Twinkies would appeal to his gourmet tastes.

Speaking of treats, the Ultimate Mets folks have a whole bunch of modern Mets in pretend cards using designs from the 1970s. If you, like me, love the cardboard treasures from that era, you'll love the handiwork on display here.

And here's some less-than-glorious artwork from Topps, a gallery of air-brushed shame. 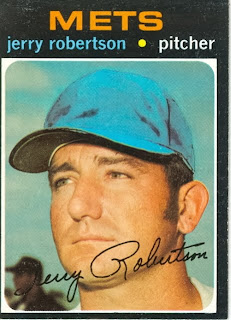 I don't know if it's coincidence or design, but a lot of air-brushed Mets didn't last with the team more than a year. This Jerry Robinson from the 1971 and Phil Hennigan from 1973 are good examples. At least Phil got a full logo on his cap. 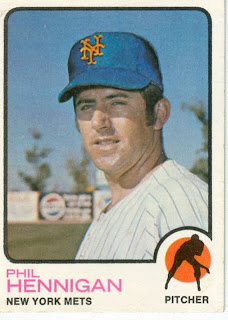 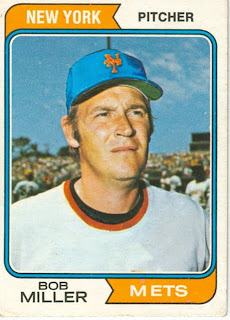 Bob Miller was an original Met, then came back for a cameo in the 1974 set. Alas, Topps didn't bother to the hide his Pirates collar. 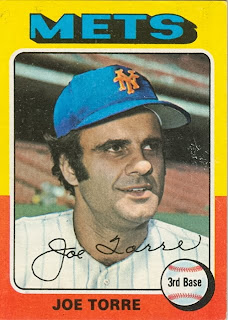 Joe Torre got the air-brush treatment in 1974, with Topps even adding the pinstripes and a button on what was a Cardinals jersey. 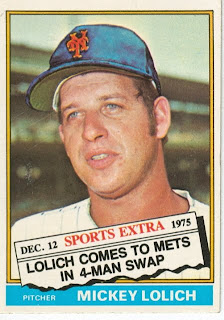 Finally, we have the sad case of Mickey Lolich. He lasted a season with the Mets, appearing in this 1976 traded card and a in a real photo in the 1977 set.

I met Lolich at a card show near Detroit years later and asked him about his short tenure at Shea.

"Hated it," he said. "I'm just an ole country boy and didn't like living in the city."

Of course, Mickey was involved in one of the worst Mets trades ever, coming from Detroit in exhange for -- you know it -- Rusty Staub.
Posted by Mets Guy in Michigan at 3:52 PM

There's a Phil Hennigan card out there somewhere autographed. He pulled the card out of my hands at Tidewater and signed it.

I can't believe I didn't realize until reading this that Le Grande Orange wasn't in either the 72 or 73 sets.

Oh well, he's just joining the likes of several who were in and out over the years, including the Mick, Topps' God of Baseball Cards, Musial, Teddy Ballgame, etc. The most famous hold-out was Maury Wills, but Jason Varitek might be the longest hold out. Wills wasn't in a card until 1967, which was eight years after his rookie season. Tek didn't make a Topps card till 2007, 9 years after his debut (although he was in a 1992 Traded card as a draft pick).

First of all who are you? No One knows the Dan's Supreme in Mass. Pk...depending on your age, we may know each other. Perhaps you went to Berner High School?

How about the airbrush on Torre's 1978 manager card ? He only spent the previous 3 seasons playing for the Mets. You'd have thought that since Topps took 90% of their photos @ Shea they could have taken 1 or two new one's of St. Joe instead of breaking out the crayolas ?

I wonder if the '74 Topps Staub wasn't designed as some sort of payback to Rusty. That is one unflattering pose...

The Expos logo was not an "elb" but a stylized capital "M" in script, in red, white and blue. For many years I also thought it was an "elb".