Now that we’re back from all the ballpark adventures and the Mets season is, well, what it is, we can get back to tracking through Josh Pahigian’s book.

Josh heads down to the deep South for Place No. 66 in his "101 Baseball Places to See Before You Strike Out." Samford Stadium-Hitchcock Field is at Auburn University. He says it's a nice little ballpark with lots of brick and charm.

I’ve never been that ballpark, but I did get to check out another yard — and some of the wild activities that surround it. 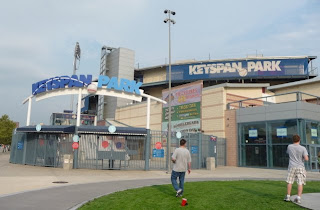 Dad, Andrew, Tim and I finished our day at Citi Field by taking a spin through Coney Island. I haven’t been there in probably 15 years, if not more. Tim shocked us by revealing had never been there.

KeySpan, of course, is the home of the Brooklyn Cyclones, a Mets’ short-season Single-A team.

There wasn’t a game at the time, and the gift shop was closed. So we were limited to walking around the outside of the park. 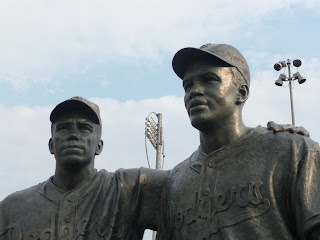 First we wandered over to the statue of Jackie Robinson and Pee-wee Reese, which is nice. It’s certainly appropriate to have some sort of recognition for Robinson in Brooklyn. Maybe the Cyclones could build a rotunda to build around the statue or something.

Then we walked down along the first base side, and saw the moving tributes to first-responders who died in the terrorist attacks. 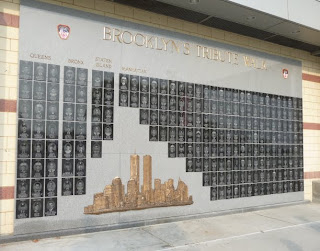 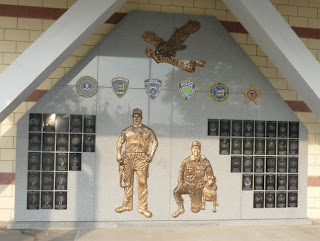 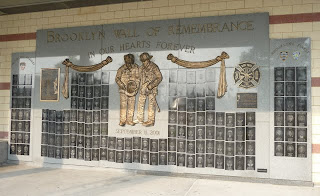 The Parachute Jump was, of course, amazing. Nicknamed "Brooklyn’s Eiffel Tower," the ride hasn’t been in operation since the 1960s. But it’s such an icon that it has survived various attempts to demolish it. 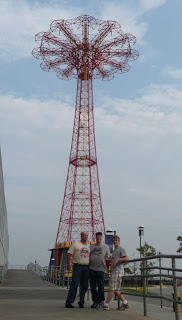 It was built for the 1939 World’s Fair and moved to be a part of Steeplechase Park in 1941. The jump was designed to train troops, but the creator had so many civilian requests to experience it that he converted it into an amusement ride.

My father rode the Parachute Jump as a child, and told us that patrons were belted into a canvas seat hanging below a closed chute.

After being tugged up about 250 feet, the chutes were opened by metal rings and people floated to the ground — slowed by the functional chutes, not the guide wires.

Dad said there were shock absorbers — springs mounted on poles — to cushion the landing, but it was pretty rough, with shoes sometimes flying away.

We walked around the back of the ballpark and could peek inside. I love the scoreboard, with the depiction of the people riding the coaster on top. 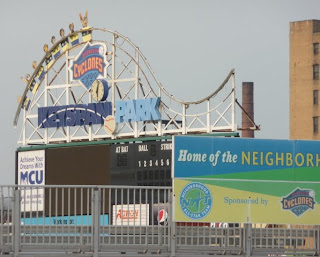 Naturally, we started our Coney adventure at the famous Cyclone, built in 1927 and now a National Historic Landmark. 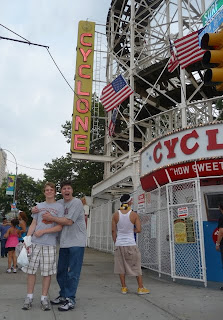 I learned that the Cyclone was in disrepair in the 1960s and shut down in 1969, condemned and nearly demolished to make room for the New York Aquarium.

A "Save the Cyclone" campaign followed, and it was refurbished and reopened in 1975. It was named a city landmark in 1988 and a National Historic Landmak in 1991. Today, the ride is owned by the Parks Department.

Next we moved on to the Wonder Wheel, which is not your average Ferris Wheel. Some of the gondolas are stationary, with the others on tracks, moving around as the wheel turns. There are times you feel the cart is going right off the edge.

The ride is 150-feet tall and can hold 144 people at a time. And like the Cyclone, the Wonder Wheel is a landmark.

We also walked along the boardwalk for a stretch, stumbling across a "Shoot the Freak" game where a real person ran around an alley while patrons shot at him with paintball guns.

Amazingly, I’d say this was only the tenth most horrifying thing we saw during our two hours at Coney Island.
Posted by Mets Guy in Michigan at 12:33 AM