Baseball Place No. 6: Rickwood Field. (And 6A: Old Comiskey Park) 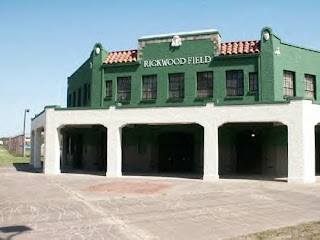 So this is the first time that Josh Pahigian has tread somewhere where I have not. But when these things happen, I shall offer up an alternative site.

Josh taps historic Rickwood Field in Birmingham, Alabama, as No. 6 in his “101 Baseball Places to See Before You Strike Out.”

Built in 1910, it’s the oldest standing professional ballpark in the country. It was home to the Birmingham Black Barons of the Negro Leagues, then the minor-league Barons until 1988 when it was semi-retired. Future Met Willie Mays played there as a teen-ager.

I’m sure it’s a great place. But I’m reminded of another ballpark that was built in 1910, and was used for two years after Rickwood became more museum than ballpark. 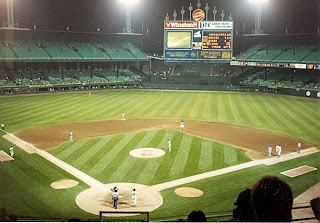 I attended five games at what was called “The Baseball Palace of the World.”

The first was in 1988, when I was in Peoria and had a day to myself before a job interview, and boldly made the two-hour drive to see.

There was a game with my buddy Rich in, 1990, the park’s final year. Will and I returned for the final two games, and we had enough adventures on that trip to fill a week of blogs. We’ll get to those days at some point.

But Rich, his friend Mark and I included Comiskey as part of a glorious, week-long baseball road trip through parks of the Midwest. That, too, was a pretty wild day and the source of our tale today.

Our trek took us to Wrigley, Comiskey, Milwaukee, Detroit, Toronto and Cleveland, with all kinds of side trips.

I convinced my editors at the Bridgeport Post and Telegram to allow me to write all this as a travel story. This was approval to contact each of the teams and secure press passes.

Unlike Fenway Park and Wrigley Field, Comiskey isn’t tucked into a neighborhood surrounded by shops and bars. Instead, you pull up and see train tracks, parking and housing projects that you didn’t dare venture near.

And while the other parks had a aesthetic charm, Comiskey was a misshapen pile of whitewashed bricks with its name painted on in green paint in a style that looked like some high school art students were kept busy for a couple days.

It was neither pretty nor trendy, and carried an element of danger. Needless to say, we loved it.

I was pretty green, which explains why I wore my White Sox jersey as hopped on the field, press pass dangling around my neck. OK, I was really green. I cringe at this memory. 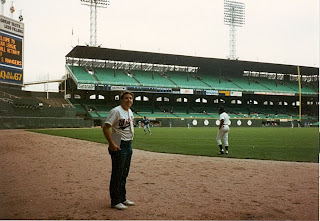 The Sox were playing the Texas Rangers, managed by once and future Met Bobby Valentine. Bobby V was from Connecticut, owned a sports restaurant in Milford that was a frequent haunt.

I saw him hanging around the batting cage, summoned my courage and approached him. Bobby was very pleasant, and I explained that we were from Connecticut, told him how much I enjoyed his restaurant.

“Gimme your pad,” he said, and wrote “Mike, Mark, Jan or whomever. Please take great care of Dave. He’s doing a great job. Buy him. Bobby Valentine.” Naturally, I prized the note more than the nachos and never presented it. 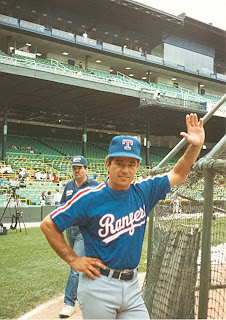 I then said something lame like, “Let me get a photo for the folks back home.” Bobby humored me, even waving, before I ran off to get more photos.

And I was shooting everything that moved, or didn’t move. Players, batting helmets, caps, gloves, bats – it was all fair game. 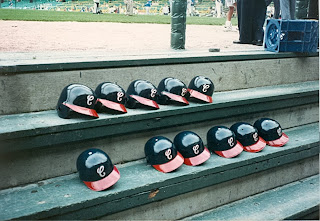 Sox outfielder Eddie Williams was relaxing in the dugout as I snapped away.

“Mr. Williams, would it be OK if I took your picture?” I bravely asked. 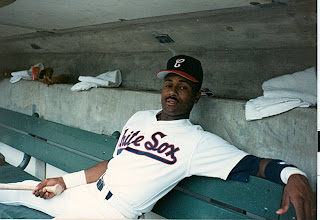 “Might as well. You’re taking pictures of everything else,” he said with a smile.

Then I joined Mark and Rich to explore the rest of the stadium, which was full of quirky corridors, alcoves and arches. We met famous organist Nancy Faust and discovered Andy the Clown, a stadium fixture who was trilled to talk to us. Mark even snagged a foul ball. 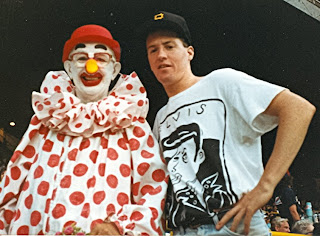 Mark and Rich are diehard Red Sox fans, that’s important to know. After the game we were walking around some more, and Rich recognized John McNamara, the former red Sox manager.

He was fired the year before and was working as a scout. He signed Mark’s ball and my pad, and I noticed his huge ring, which looked kind of like a World Series ring with the Red Sox “B” logo. I knew it couldn’t be a Series ring, since his Sox famously lost to our Mets three years prior.

“The American League championship from ’86,” he said. “One out away. One more out and it would have been a much bigger ring.”

I could not believe that the man who made the infamous decision to send Bill Buckner out to field first base at the end of Game Six -- move that brought me so much joy when it turned sour for him – was right there talking about the move.

I decided not to tell him about my Mets fandom, or thank him for the move.

Rich, however, brought up McNamara’s unfortunate recent firing, and McNamara then went off on an absolute tirade about Boston Globe sportswriter Dan Shaughnessy, whom he blamed for the dismissal. 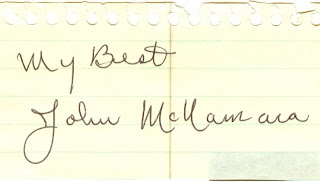 McNamara was getting really worked up, and we started backing away slowly.

The next night we saw the Red Sox play the Brewers in Milwaukee, recognized, Shaughnessy and told him about McNamara’s outburst.

We had a lot more fun that day than in Comiskey’s final two games, which the Sox could have handled better.

We went to the new ballpark the following season, and watched as crews demolished the Baseball Palace of the World, which was even sadder. 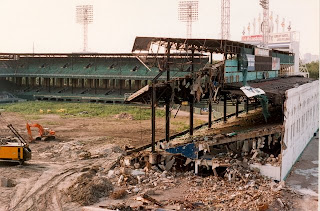 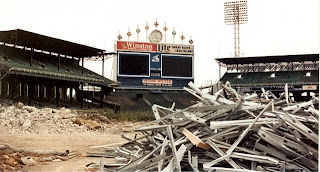 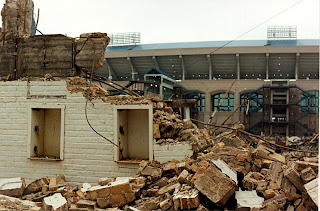 Today, all that remains of Old Comiskey is a marble marker where home plate sat, and foul lines painted in what is now a parking lot across the street. 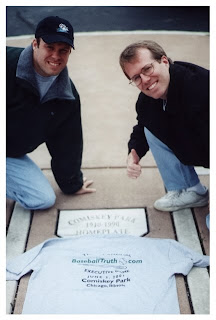 Dave, You took me to a game there when I was a kid. You even let me wear a Cubs shirt. I got a lot of dirty looks...