"Mets by the Numbers," an awesome read -- with one very cool photo! 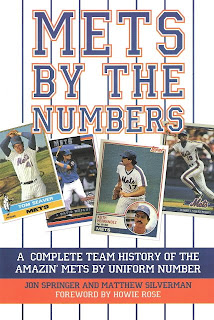 Tracy Stallard ranked 10th in the National League in home runs allowed in 1963 – but he was only fifth on his own team, which speaks volumes about the ’63 Mets. And he wore No. 36.

Vance Wilson will one day tell his grandkids that he backed up the two greatest catchers of his era: Mike Piazza and Ivan Rodriguez. And he wore No. 3.

Richie Hebner “arrived reluctantly on the eve of the 1979 season and overnight became the third baseman he no longer was and the clean-up hitter he never was suited to be.” He, too, wore No. 3.

Clearly, I’m reading from “Mets by the Numbers,” by Jon Springer and Matthew Silverman, quite possibly the best book ever written.

And I’m not just saying that because Jon asked me to contribute a photo of my Mercury Mets jersey, though that clearly doesn’t hurt. It’s right there on page 129. Sweet.

I got my copy earlier this month, and I don’t think a day has gone by without thumbing through its pages.

It’s not the kind of book where you plop down in a comfy chair and sit there until the next morning to see how Harry disposed of Lord Valdemort.

No, this is like a reference book I turn to each day, maybe for a couple minutes or maybe for half-hour. I plan to keep it on my desk at work, right there with my other resources.

Like with Jon’s Web site, http://www.mbtn.net/ , he approaches Mets history numerically from Richie Ashburn (1) to Turk Wendell (99), or until Tony Clark, depending on where you think his 00 stands in line.

He takes each number and tells you which players wore it and for how long – and why we should care about each one. And it’s written with equal parts tenderness and frankness.

Sometimes a number is redeemed and forever linked to glory, like No. 41.

And others just seem to be either bad luck or an indicator of trouble to come. Take this passage about No. 43, which comes a mere two digits over.

“Former Yankee Shane Spencer made the Mets in 2004 and proceeded to make an Art Howe-led club make more taken advantage of than usual. Whether it was urinating outside a pizza joint then beating someone up about it, walking through a bar barefoot and being amazed about a foot getting cut on broken glass, or getting a DWI on a subsequent rehabilitation assignment, Spencer made you forget that he was about the best 43 with a bat the Mets have ever had.”

Plus, Jon takes little side trips down all kinds of streets, telling us, for example, that Jason Isringhausen had the longest name in team history. Like with Pop-Up Videos from Friday, I don’t why I needed to know that information, but I’m better off because I do.

What’s neat is that Springer and Silverman show a fan’s appreciation and for players who were stars, but an affection for the guys who might have just been passing through but made Shea a better place while they were there.

I’m going to keep it in arm’s reach for those moments when I think, “George ‘The Stork’ Theodore was a fun player back in 1973. Wonder what number he wore.” And would be both 18 and 9.

Email ThisBlogThis!Share to TwitterShare to FacebookShare to Pinterest
Labels: Mets by the Numbers

Dear Mets Guy,
I'm a long time reader but rarely ask advice, I hope you don't mind. I was wondering how you felt about this: I bought a glove shaped like Michigan, but I only paid $10.00.
Am I crazy or just heading there in a high speed bullet train? Looking forward to your insight!
TW GB