Streak continues, but it was still a glorious day at Wrigley 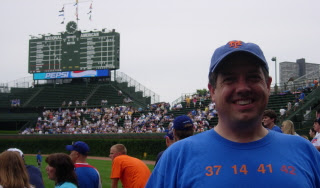 I can’t prove that Tom Glavine sent word that I would not be welcome at Wrigley Field on Sunday.

But after the streak-extending debacle on Saturday, I can’t say I’d blame him.

Will surprised my on my birthday last April with a glorious present – a ticket to see the Mets play the Cubs at Wrigley Field. Laurie, his girlfriend, is a member of a group that has season tickets, and she was able to snag the Mets tickets, and was even able to grab seats for the game against the Reds, who are Will’s favorites.

He did warn me that the Cubs are something like 8 and 1 when he is in the Friendly Confines. And that’s not even counting the game in Cincinnati last weekend when we saw the Cubs pound the Reds.

And he knows of my painful streak of not seeing the Mets win in person since 1991, a trail of tears that was of course extended in June when the Tigers remembered they were good and slammed us 15-7.

So clearly, the odds were not in our favor. But any opportunity to see the Mets in person is to be treasured, and to see them with my best friend in a fabled yard is just extra special.

I haven’t seen a game at Wrigley in years, and Will warned me that things had changed a little.

Not the yard itself, but rather the people in the seats. It used to be that the bleachers were the trendy place to be. But now the ballpark sells out for the season, and is packed with people Will calls “Trixies and Tylers,” who are there to see and be seen.

They’re part of the overflow crowd at Murphy’s before the game, show up around the middle of the second inning, then depart after seeing which celebrity sings “Take Me Out to the Ballgame.”

And make no mistake; the streets around the ballpark were jam-packed even 2.5 hours before the game. It’s neat to see all the Cubs-themed shops, bars and even street vendors.

Even the billboards were cool. Absolut has an ad reading “In an Absolut world,” and showing the famed billy goat getting a seat in the park, eliminating the curse. 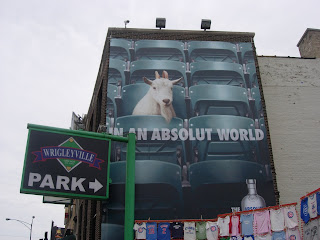 Some people were knowledgeable. Naturally, I was wearing my Faith and Fear in Flushing t-shirt, and the owner of one of the souvenir stores said “OK, I know what the shirt means, but who is No. 14?” I explained it was Hodges, and gave him credit for knowing Casey, Tom and Jackie.

Inside, two ushers – two nice older ladies – also asked me about the numbers then insisted they take my photo with Wrigley in the background.

We picked up our cool Ryne Sandberg freebie caps, squished pennies for my daughter and enjoyed the Mets stretching and taking BP. The Wrigley bullpens are near the stands, and we were able to watch Oliver Perez getting in some work.

The Cubs do something else neat, they sell food and soda for 25-percent off for the hour after the gates open, so we snagged some fine brats and settled into our seats in the upper deck along the third-base line. 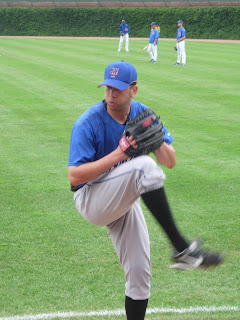 Will was dead-on about the Trixies. A pair in their late 30s came and sat next to us in the second inning. The following is the extent of the baseball conversation they had with us, themselves for anyone else.

Trixie: Are you guys season-ticket holders?

Me: I’m not, but by friend is part of a season-ticket group.

Trixie: Oh. We bought these from a guy who is a season-ticket holder.

Trixie: No (with disgust.)

And that’s it. As Will said, “They’re here for a game, but it ain’t baseball.”

They walked around for a while, came back to their seats and the Trixie who had the short conversation before asked if she could eat some of my peanuts. Never had that happen before.

And of course, they departed after Chris Chelios sang during the seventh-inning stretch.

Of course, the Mets lost. My (now extended) streak of shame: 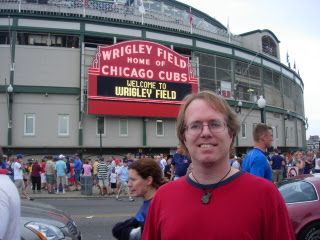 After the game we headed over to the Northwestern University campus, where Will showed me his old stomping grounds and we dined at the appropriately named Dave’s Italian Kitchen for an amazing meal.

We then caught up with Laurie and finished the night at an ancient, eight-lane bowling alley for some glow-in-the-dark bowling. Timber Lanes had a juke box with like a gazillion songs.

A pretty fantastic day, save for the third inning.
Posted by Mets Guy in Michigan at 11:16 PM

Email ThisBlogThis!Share to TwitterShare to FacebookShare to Pinterest
Labels: Streak of Shame, Will, Wrigley Field

Next time you're given a ticket like that, kindly request it come without the third inning.

Dave,
I’m on my knees (actually I’m sitting on a comfortable chair) but you get the point. NO MORE LIVE GAMES FOR YOU BUSTER!!!! Think about how poor Wright feels, he wakes up, eats a good breakfast, “this is the day” he whistles happily in his head”, then, out of the corner of his eye……Murray. It’s like when Seinfeld used to see Newman. In his head he’s thinking……Murray. Why, why now!!! We need this win. The Braves and those damn Philles (what is a Philly anyway), I know what a Filly is but…I digress. Please, gift or no gift; have the strength to just say no. That worked for Nancy Reagan (not for the drug problem, but for the other duties of the first lady). Nay, have you the common decency man. Listen, you have a problem, first ante up, and then work on it. Maybe an intervention would work. If you only filled me in about this before, like when I visited last year; but, no, you were too wrapped up in showing us a good time (that’s just downright selfish Mister!!!)You can call me anytime, join a sewing bee, build a bird cage, anything, just not another live game!!! Please Dave, it’s been one of those years, I need them to win it all!!!
By the way, Reyes is thinking the same thing, only in Spanish.
Much love,
TW GB

On alighter note, Kathy and I saw the Police on Sunday night at Ginats Stadium. Incredible show!! They played for two hours. Sting looked like it was still 1988. Can;t say the same for Copeland and Summers though. Man have theya aged. They did give it their all on a hot summer night in New Jersey.

Dude, I can't help it! I just can't stay away. Well, actually, that's not true because I do stay away from Shea since I don't live there anymore and I only get to see them in rare occasions on the road. But what are the odds?

And really, I think we're getting closer to a win. Not counting the two spring training losses I saw this year. But the Tiger game was 15-7, then the Cubs game was 6-2. I figure if I see them again this year it will be 3-1 loss, then a 1-0 defeat and then an extra-inning loss then FINALLY a Mets win.

The other potential solution is to go in disguise, maybe dressed as a Derek Jeter fan. Well, maybe not a Jeter fan. But say a Nationals fan or some other team that is harmless and inoffensive. Then the Mets might not sense my presence and blow the game.

All the games I have been to with you in all the cities that we have visited, we have never seen a game where the team we were rooting for won… I used to think I was the curse… but now I see that it is you… I feel so much better..