Using the Mick to stick it to 'em! 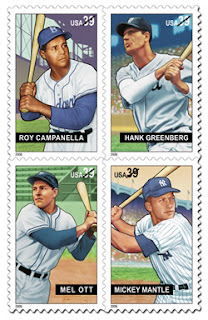 I get pretty excited when the Post Office puts baseball players on stamps.

Not that I’m a big stamp guy, but since you have to use them anyway, I’d rather use the ones with something cool or New York-ish, like the Statue of Liberty.

And the Post Office did a fine job a few years back when it offered a "Legends of Baseball" issue that had portraits of 20 players, only two of them Yankees — Ruth and Gehrig, probably among the least objectionable Yankees, if there is indeed such a thing. And it was easy to overlook them when they are surrounded by players like Jackie Robinson, Christy Mathewson, Roberto Clemente and former Mets coach Rogers Hornsby.

So I was pretty excited earlier this year to see that there was a new "Baseball Sluggers" issue. I know it’s unlikely that a Mets player would appear since a person has to have made their final out on Earth at least 10 years ago to be eligible. I’m in no rush to get Willie, Tom, Mex and our other heroes immortalized in that way.

But after the success of the Legends issue, I was hoping for something cool.

Alas, the first day I asked for a sheet there was great disappointment, then horror.

There were just four players repeated over and over. Three were guys we can all cheerfully honor: Roy Campanella — excellent — Mel Ott and Hank Greenberg. Then I saw player No. 4. Mantle.

Yikes! Not only a Yankee, but practically Mr. Yankee!

Just so you know, if you ask the postal clerk to remove all the Mantles from the sheet and replace them with Campanellas, not only will she deny your request but she will laugh out loud and tell the other postal clerks what you wanted her to do and say something about getting this all down for the employee newsletter.

So I brought the sheet home with all these moral issues.

First, I’m glad that these are the self-sticking kind of stamp because the last thing I want to do is lick the back of dead Yankee. I don’t even want to imagine what that would taste like.

But how exactly can you use a Mantle stamp? I can’t justify throwing them away now that they cost 39 cents each.

But it’s not like you can use them on certain types of mail, either. How do you send a card to your mother? It’s like saying, "Hey, hope all is going well, Mom, despite the fact that there’s the image of a booze-hound Yankee punk stuck to your envelope."

Or, "Happy birthday, nephew. Don’t consider the guy under the postmark to be any kind of role model."

And the nieces. Can you imagine how many My Little Pony sets I’d have to send to Florida to make up for the sobbing phone call, "Uncle Dave... I thought ...you loved me...why is...that scary man...on my envelope?"

I had to come up with some guidelines. Loved ones get the Campanellas, since he is a former Brooklyn Dodger, which is kind of like being a Met before there were Mets. Occasionally I can use the Ott -- a valid New Yorker -- or Greenberg, a swell guy we all like, when I use up all the Campys.

Mantles, I decided, go on the bills. And not just any bills. The kinds of bills that get you ticked off just writing the check. The ones where you can fell you can make a statement by slapping the Mick right there in the top corner.

Exxon Mobil and your $3 a gallon gas and record profits? Take a Mantle and his "I’ll outspend you without caring about the cost to everyone else" team he represents.

Comcast Cablevision? I’d like to be able to get the SciFi channel for my wife without having to pay for digital cable -- despite the fact that every other system includes it in the basic package. You get a dead Yankee!

Sports Illustrated subscription bill? Hell, the people who employ Tom Verducci would actually like getting a Mantle stamp, so they get Hank Greenberg.

Oh, and don’t tell me that Verducci isn’t preparing a column demanding that all four players in the series need to be Yankees, and shouldn’t the rules be waived so Derek Freaking Jeter can take his rightful place among the game’s most honored?

Mortgage company? I like my house, so they get Mel Ott.

But the car insurance company? Oh yeah, baby, the Mick is headed their way.

So at the end of the day, the bills get paid, statements are expressed and I get to vent a little.
Posted by Mets Guy in Michigan at 4:39 PM

No Stan the Man stamps?

Nice post.Those stamps are cool but,I agree the Mickey Mantle ones can be left for teh Ugly bills.

Sometimes you like what someone wrote because you like the way it was written. And I do.

But I love what you wrote for the selfish reason that I AGREE COMPLETELY! I was off the wall thrilled when I heard Mel Ott was getting a stamp. Mel Ott is one of the greatest National League players ever and has been largely forgotten. Hank Greenberg enjoyed a revival of interest a few years ago with the documentary about his life and he's a bit of a historical idol of mine. And Campy is Campy.

But I was annoyed that five of every sheet of twenty I bought had Mickey Freaking Mantle on it. It's not that I harbored any particular ill will against this player during his life or after his death. It's just that his presence on the sheet caused me to spend $1.95 on an image I wanted to spend nothing on. And you know somehow that the Tom Verducci of the U.S. Postal Service media relations office put out a press release attesting to the success of the Mickey Mantle stamps, so we better re-issue him and the Babe and Larrupin' Lou and, oh, Charlie Silvera while we're at it.

A person need be gone ten years for a stamp (except for presidents). Gird your loins for 2009 when Joe DiMaggio ruins your utility bills.

Well said. If I had a letter to send you I'd use one of my highly-valued Hank Greenbergs.

In my first sheet of these stamps, I kept trying to get rid of the Mantles but didn't have enough lousy mail to send, so my first the sheet eventually whittled down to all Mantles, which made me realize . . . I need more enemies.

Although I hate the Yankees as much as the next guy, I don't really have anything against Mantle, but the golden halo bestowed upon him by pmpous blowhards (at least on this subject) Billy Crystal, Bob Costas, Stephen Jay Gould, et al, really makes my stomach turn.