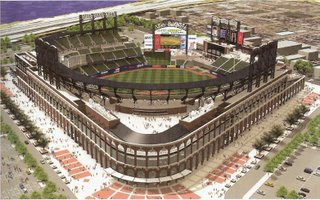 Now that we have some idea of what the new Mets stadium is going to look like, we can fixate on what it’s going to be called.

After all, stadium names are important and run from perfect to "Honey, cover the eyes of the children." The name becomes an important part of a team’s identity. And even if the new title is going to go to the highest corporate bidder, there should be some rules so we don’t get stuck with some atrocity, examples of which we shall discuss later on.

One of my favorite bloggers, www.lonestarmets.com, has started the debate with a poll listing nine suggestions. I encourage you the check out his site and start voting. Here are his suggestions, and how the voting fared as I typed this.

— Ashburn Stadium (1 percent): I don’t like this one. Richie played just one year then hung ’em up.

— Payson Field (2 percent): Joan Payson was a pioneer and doesn’t seem to get enough recognition. But you could have made a better case for slapping her name on the first stadium.

— The Ballpark in Queens (8 percent): This would distinguish it from that Outhouse in the Bronx.

— Jackie Robinson Stadium (11 percent): No argument from me. Jackie’s one of my heroes. But naming stadium after other teams’ stars might not gain broad acceptance.

— Gil Hodges Stadium (17 percent): It’s never a bad idea to salute Gil, and it would serve as a tribute to his former team, at least the Brooklyn-based version of it.

...and the leading vote-getter so far:

— Derek Jeter Sucks (39 percent): Lone Star is clearly thinking outside the box here. But I can’t find fault with it. It makes a very bold statement, and does so with a little bit of attitude. Jeter does suck. Yet we’re the only ones who seem to realize it. The Yankee hype machine has everyone thinking the guy is going to Cooperstown. Why not stake a claim for truth in sports? The Yankees have always been button-down, corporate America. The Mets have been the team with the attitude and edge.

So now we know what the fans want. But we must grasp reality. The name is going to go to the highest bidder. Let’s establish some ground rules for the team to use when it decides which pile of cash it is going to accept. 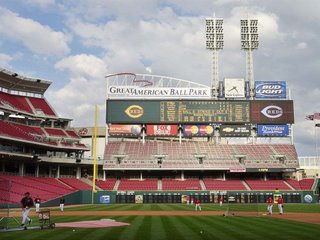 The Reds got lucky with a great corporate name that doesn't seem like one.

The Reds got lucky with Great American Ballpark, at least with the name. But there aren’t too many other corporations with names that work so well.

And there have been a number of out-and-out disasters in recent years. Take that place where the Astros play. It started as Enron Park, which was hastily changed after the scandal. It had a generic name for a short while before it became Minute Maid Field, which is just embarrassing — though not as embarrassing as "Yankee Stadium." 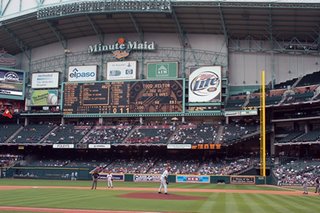 The Astros' ballpark started as Enron and is now named after juice - and the game is juiced up enough as it is.

We can learn a lot from the mistakes of others. So Wilpons, start taking notes:

1) Pick a company that we think might be around in a couple years, or at least not start merging all over the place. Look at the fiasco in San Francisco, which started as Pac Bell Park, became SBC Park and now goes by AT&T Park. The place has had three names during its six-year existence. Contrast that to, say, Wrigley Field, which has had the same name for 80 years. The Diamondbacks are on their second stadium name, and the Marlins on their third.

2) Don’t name the stadium after a dumbass. The Braves could have named their stadium after Hank Aaron, an all-American hero. Instead it was named after Ted Turner, a guy who married Jane Fonda and kept doing other goofy things like thinking he could manage a game. No wonder they can’t get people to show up to playoff games.

3) Keep it short and simple. Busch Stadium, Tropicana Field, Coors Field, Miller Park, Safeco Field. All easy to say and remember. U.S. Cellular Field — not so good. And besides, no one is ever going to call it that. 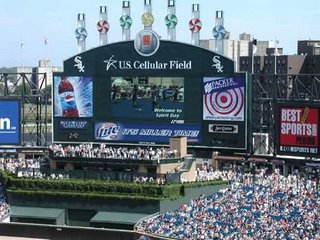 The park formally known as Comiskey.

4) No names that will tick everyone off. Naming rights cost millions of dollars, right? So why is KeySpan, a utility, shelling out big bucks when it is supposed to be keeping my monthly bill lower. It’s one thing when some corporation is buying names. You can choose not to buy their products. But I shouldn’t be forced to subsidize the natural gas company’s publicity efforts.

There you go. Now if we can get Chase Bank to change its name to Derek Jeter Sucks and buy the naming rights...

I read this suggestion in article, and it came from a Mets fan. The best potential buyer of the name rights: Met Life, the insurance company.

Yes! Met Life Park!!! Could it be any better?

Actually, the only thing that would be better would be to convince the company to buy the naming rights to another new yard in the works -- the one in the Bronx.

Oh, to see the Yankees played in a place called Met Life Park would be so glorious that I'm considering taking up a collection to help the company along.

Posted by Mets Guy in Michigan at 9:08 PM

Dave, non-Blogger sites cannot link to your posts. :( I have a few suggestions for the park name.

Hey Dave, I am up in Charlevoix and from Long Island. I am looking into Direct TV, as I know Charter Comm. will never have SNY.

Do you have Directtv and can we get SNY here in Michigan.

I know this is an out the blue question, but I have to ask it.

What I'd like to see is an Orials-style name. We all know that the older mets fans want their new park to be caled "ebits field"...and frankly I can agree with that. So why not call it "ebits field at 'whatever the sponser's name is' grounds."

He needs all that protection