The venerable baseball card maker is asking collector to vote on the company's top 60 cards of all time.

Sounds like fun, except the company made some serious mistakes. It limits voting to 100 pre-selected cards, and only five of them are Mets! Worse than that, there are a bunch of Yankees in there, even Derek F. Jeter!

This will not do.

So I’ve been sorting through my binders of Topps cards to create a true top 60, and asked the fine folks at the Crane Pool Forum to send their suggestions, too.

First we have to determine what, exactly, makes a baseball card great. Topps seemed to cling to its more valuable cards, or most notorious, in the case of the Jeter “error” with Mantle and President Bush photo shopped in the background. Clearly the shot was faked because it was taken at a day game, and Mick doesn’t look hungover.

But in my eyes, there are many factors that go into creating a great card. It can have a great player, but it can have a great photo of an average player. Sometime the design just pulls everything together like Lebowski’s rug. And sometimes a card just instantly transports you back to a special time or brings a smile to your face.

So here, working backwards, is the top 60 Topps cards of all time, part 1. 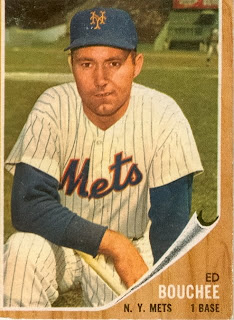 Bouchee certainly was not the best of the 1962 Mets, appearing in only 60 games and batting just .161. But his card is historic, marking the first time the Mets full uniform appeared in a Topps set. Since the team was new , Topps relied heavily on its “big head, no hat” shots for Mets that year. Only two players, who appeared in a later series, are shown wearing the beautiful Mets uniform. Don Zimmer, who lasted just 14 games, is wearing his Mets cap. But Bouchee has the only card showing a whole uniform. 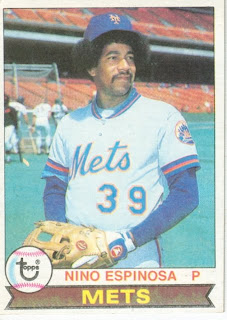 This a fun card because it’s cool in a “so bad that it’s good” sort of way. There’s a lot going on here. It’s not Topps' best design, to be sure. And the brown design just doesn’t work for the Mets. Nino’s cap can barely contain his afro. But I want to know what’s going on with his uniform number. Why is there so much space between the 3 and the 9? It’s not like the clubhouse manager at the time was distracted with gambling and illicit memorabilia sales. Alas, now that Nino is regretfully playing ball in the Iowa cornfields, we'll never know. 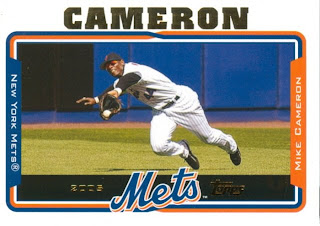 Cameron was an amazing centerfielder, and graciously tried moving to right when Carlos Beltran came on board. Their collision certainly ranks among the scariest moments in Mets history. But here’s Mike flashing some of his famous leather, diving in a great horizontal card. 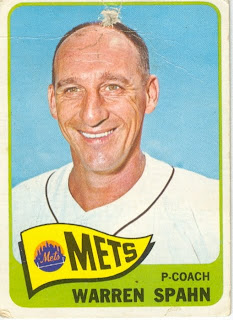 Warren Spahn was one of the greatest pitchers of all time and he was a Met. This is proof. And it’s a rare player-coach card, too. I always associate it with another player-coach card from that set, which would be… 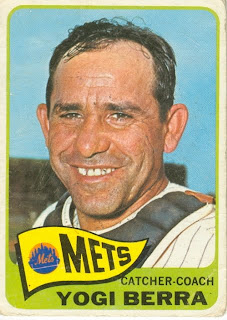 Typical Yankees. All Yogi did was complete his Hall of Fame career, then manage the team to the World Series – and get fired. Yogi then came to the Mets for a couple at-bats, then retired again to join the coaching staff, eventually to manage. 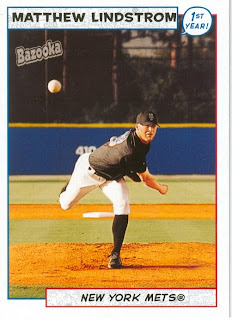 The Bazooka sets were one of Topps’ attempts to bring kids back into the hobby. And Lindstrom never made it to the Mets, traded to the Marlins with Henry Owens for Adam Bostick and Jason Vargas. Not Omar’s best deal. But Lindstrom has an absolute gun for an arm – some might say a bazooka – and here’s a batter’s view of a high hard one coming to the plate. 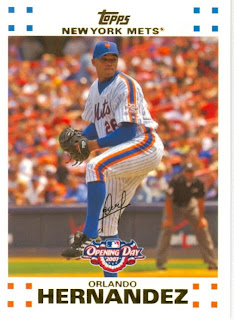 I love when teams wear throwback jerseys, and we all have a warm spot in our hearts for the racing stripes. This card of “El Duque” shows him saluting the 1986 champs, complete with the 25th anniversary patch. The base set that year had black borders. I chose the Opening Day set because I like the white better, especially with this photo. 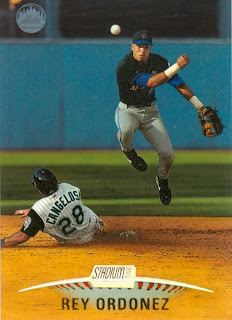 Rey couldn’t hit a lick and said some stupid things near the end of his tenure, but he sure could field. This card shows it. This must have been John Olerud's point of view! 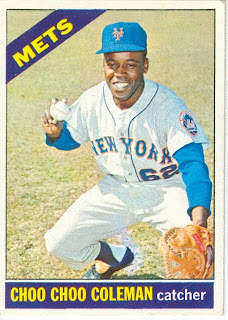 It is among the best quotes in the history of the Mets.

Ralph, exasperated: “So Choo Choo, what’s your wife’s name, and tell me what she’s like.”

Choo Choo: “Her name’s Mrs. Coleman, and she likes me, Bub.”

I love Choo Choo’s smile in this photo. 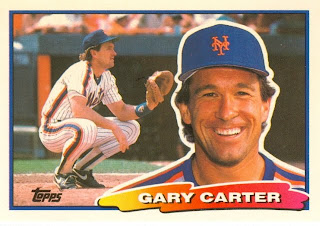 Gary Carter was a smiling catcher, too. But he was a much better interview. These Big series recall the glorious 1956 set.

That’s the end of part 1, and we’ll pick up the pace of postings. I’ve love to hear what cards you think should be in the top 50.
Posted by Mets Guy in Michigan at 8:59 PM

And here I thought I was reading a list of the 60 greatest Topps cards of all time, not Mets cards. Silly me ...

(George Theodore and his marshmallow milkshakes better be on there ...)