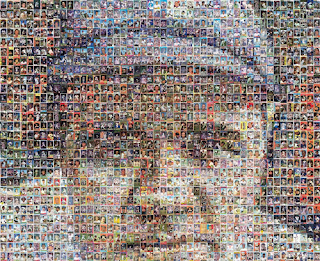 I can’t think of too many things that would prompt me to lose my appetite more than a 9-foot by 12-foot mural of a Yankee.

Except, maybe a 9-foot by 12-foot mural of a Yankee created using 1,392 smaller portraits of Yankees.

Seriously, how does the ESPN Zone on Broadway in Manhattan expect to sell any food?
Sadly, Josh Pahigian takes us there for spot No. 54 in his “101 Baseball Places to See Before You Strike Out.”

Josh, whose cred as a Red Sox fan weakens with every Yankee-centic post, selected the artwork by Robert Silvers, which is a photo mosaic of Babe Ruth made with 1,392 baseball cards, all of them Yankees.

I’ve never been to this particular ESPN Zone, but I have been to a New York art exhibit that had more appropriate subjects.

I’d heard stories that Tom Seaver would often take young players under his wing, and take them to see art museums while on road trips.

That Tom, a very cultural guy.

During our first year living in Connecticut, I heard about a new baseball art exhibit opening at the New York State Museum in Albany, which was a fairly long drive by East Coast standards.

Here’s the amazing thing. Seaver, ever the cultural ambassador, was promoting the exhibit.

This was only months after he hung up his spikes. To celebrate the opening, Seaver would pitch to 30 lottery winning fans at Albany’s Lincoln Park. It was Tuesday, Sept. 15, 1987.

I cannot imagine the thrill of stepping in the box and facing the Franchise, hero of my youth. 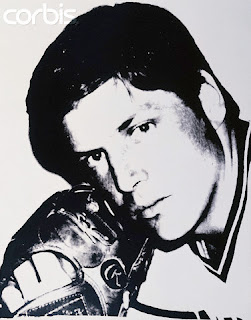 Alas, my bride-to-be and I were unable to get to Albany that day, arriving that weekend to see the exhibit.

My fiancée – we were less than a month away from the wedding day – indulged me by making the trip and then touring the maze of underground hallways under the capitol plaza.

The exhibit’s full name is ''Diamonds Are Forever: Artists and Writers on Baseball,'' and combined both visual and literary art. There were 116 paintings, sculptures, photographs and lithographs plus quotations from 55 writers.

Among the most famous pieces was Michael Langenstein's ''Play Ball,'' a variation on Michelangelo's ''Creation of Man'' on the ceiling of the Sistine Chapel in which God hands Adam a baseball. 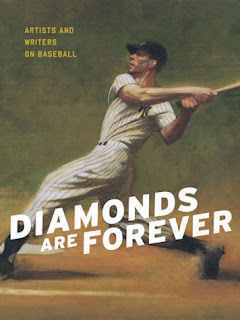 But the best of the lot was Andy Warhol’s portrait of Seaver. Tom is wearing his road Reds jersey and isn’t wearing his cap, which seemed a little odd.

But apparently Warhol was kind of an odd guy, so we’ll let that pass.
There was a Warhol exhibit here in Grand Rapids recently, and I rushed through looking for his masterpiece.

Alas, there were plenty soup cans, but no Seaver.
Posted by Mets Guy in Michigan at 9:14 PM