Delmon, the Rocket and what to do with bat-chuckers 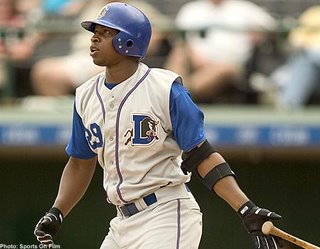 OK, let me get this straight.

Devil Rays prospect Delmon Young flicks his bat at an umpire and columnists come out of the woodwork with self-righteous rants about how he should be banished for the rest of the season, if not longer.

But then you have the 2000 World Series when Roger Clemens decided to perk up Game 2 by picking up the shattered barrel of Mike Piazza’s bat, then opted to play a game of “catch the javelin” by hurling it at our man Mike as he ran up the baseline.

Clemens must have been frustrated that Piazza made contact, since Rocket was no doubt aiming at Mikey’s noggin, where he’s thrown oh-so-many times in the past.

And what was Clemens’ penalty for his attemped biopsy? A $50,000 fine and the woosh of a basesball flying past his butt, since Shawn Estes apparently was unable to drill the Rocket when he had the chance to do it and all of New York – at least the part we care about – demanded it..

Then you had he fawning Yankee apologists in the media lauding Clemens’ “intensity” and implying that Piazza was a wuss for not charging the mound.

I assume that Piazza realized he was the best hitter on the team and getting tossed out during the first inning of a World Series game would hurt the Mets. That makes him smart.

But I don’t think anyone can accuse the 20-year-old Young of being smart, at least in this case.

In case you missed the video, Young last week was called out on strikes, then stood frozen in the box, then took his sweet time walking out. We can’t tell if he was mumbling some choice words as he left, but the umpire tossed him before he got too far.

Then, with Young off camera, you see a bat magically come flying in from the side, striking the umpire on the chest. It doesn’t look like the bat was thrown especially hard, though it was hard enough to fly at least 10 feet and hit someone near the shoulder.

The best part is the utter non-reaction from the other team’s catcher. The bat caught his eye, and you see him follow its flight. Then he took off his mask, turned and walked to the mound like nothing happened.

If he’s expecting the love tap that Clemens got, he’s mistaken. For one thing, he bonked an umpire, an authority figure, and not another player.

But most importantly, Clemens was a Yankee and there are different rules for them. 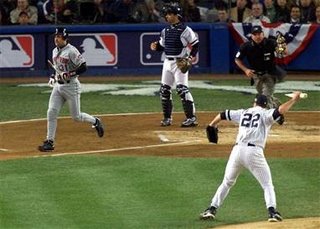 You think I’m kidding? Jason Giambi pretty much admits to being juiced in leaked grand jury testimony. Then Gary Sheffield allegedly admits to being stupid – technically, not realizing he was taking ‘roids.

And the response from Major League Baseball? (Cue the chirping crickets.)

But allegations are made in a book about Barry Bonds, who has the misfortune of playing for the Giants, and we have a former U.S. senator heading an investigation.

So Delmon can expect to be sent to time out for a good long stretch.

Of course, the best punishment might be to send him to the majors. Remember, he plays for the Devil Rays. Promote him and he’ll be playing for a horrible team in a dreadful stadium in butt-ugly uniforms.

If that doesn’t make suck out his will to live and make him beg for forgiveness, nothing will.
Posted by Mets Guy in Michigan at 4:22 PM

Nice post Dave. I had heard about the incident but had not seen it. Unbelievable. To my trained eye that is Attempted Assault with a weapon, a felony in New York. The video is mind boggling.

Your homerism challenges the best of them. :)

There is a clear difference between the two scenarios: Young's bat hit the "assigned authority" on the field; Clemens' partial bat missed a player. One involved a player in the minor leagues and one involved a future Hall of Famer in the World Series.

Does that make Clemens' act something to celebrate? Absolutely not. It was bush league.

Answer honestly: If Clemens had thrown that same bat at the home plate umpire, do you think there would not have been a response?

Do not feign surprise here. If Pizza boy became a Yankee now, you would hardly care. ;)

As for the differences between the public's reaction to Giambi, Sheffield, and Bonds on the steroids issue, it has nothing to do with Yankeedom, as far as I can see. This nation is forgiving. It boggles my mind, but it is. Look no further than the trial of Zacarias Moussaoui. Here is a man who admittedly was in our country illegally and trying to participate in the worst episode of terrorism our country has ever faced. What do we do? We spare his life. He had a rough childhood, therefore, he had no choice in what he became. We cannot execute someone who had a bad childhood.

So, knowing we are forgiving folks, Giambi and Sheffield basicaly admit the cheating they did. America forgives them . . . particularly after Giambi began to hit again. But Bonds won't admit it. He has worked hard, that is all. He wants to pass Ruth. He is too good to have cheated. America forgives, but America isn't stupid (well, a case could be made that a good portion is, but let's not have that get in the way here). Bonds will be reviled forever.

Damn, Bob. Not even I would have linked Zacarias Moussaoui to the Yankees. But now that you mention it..... :)

Patrick Kennedy drives his vehicle into the Capitol and what does he do? Seeks forgiveness. The Kennedys know all about this.

And Bonds was booed loudly at CBP last evening each time he came up.